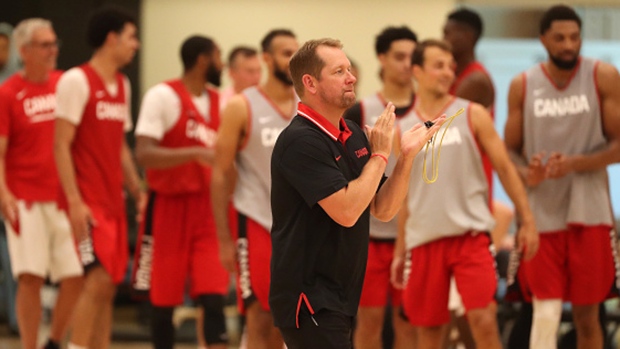 TORONTO – Like everybody else in these uncertain times, Canada Basketball is waiting and hoping.

This upcoming summer was supposed to be the organization’s most important to date, a chance to make history and continue celebrating the growth of the game throughout the country.

The national women's team – ranked fourth in the world – recently qualified for Tokyo 2020, where they would have had a real shot to earn their way onto the podium for the first time ever.

In the hopes of punching their ticket to the Olympics for the first time in 20 years, the men were poised to put together a talented roster for their last-chance qualifying tournament in Victoria, B.C., this June. They finally secured commitments from some of their best players, including NBA stars Jamal Murray and Shai Gilgeous-Alexander.

But that, like just about everything else in and outside of sports, has been put on hold indefinitely as the world contends with something far more pressing: the coronavirus pandemic.

Japanese Prime Minister Shinzo Abe and IOC President Thomas Bach agreed to postpone the Tokyo Olympics until no later than the summer of 2021 on Tuesday.

On Sunday night, though, the Canadian Olympic Committee decided to take action. Canada became the first nation to announce its intention not to send its teams to the Olympic and Paralympic Games in the event that they continue as planned this summer. Australia quickly followed and other countries likely will too, essentially forcing the IOC’s hand.

It was a bold call and one that couldn’t have been easy to make, knowing the years of hard work and sacrifice that have gone into each athlete’s Olympic journey. But even greater sacrifice is needed now.

“It was the right thing to do,” Glen Grunwald, President and CEO of Canada Basketball, told TSN over the phone on Monday. “It’s a tough situation for everyone involved but we have to do what’s right for our community and our world. I think it showed good leadership on the part of the COC to take that initiative and step, and hopefully it will result in a safer world and an Olympics that can take place [at a later date], celebrating excellence and community and health.”

“When that happens, I don’t know. I hope it does happen. But I think we just need to be prudent and go forward like we have here. So we’ll wait for the IOC’s decision and hopefully it’ll work out so that all of our athletes will be able to represent Canada in the Olympics at some point in the future.”

Some will say that the COC acted prematurely, that they should have waited this out and hoped the IOC would make this call for them and for everybody else. What if the situation improves faster than people think?

It’s OK to be optimistic. You can and absolutely should hope for the best, but that doesn’t mean doing so blindly or at the expense of taking the necessary precautions and prioritizing health and safety.

The reality is that the world isn’t going back to normal in a few short months. It’s going to take time. To leave athletes in limbo, unsure of whether or not they’ll be allowed to compete on the world stage and at the highest level of their respective sports in four months, is unfair and irresponsible.

They, like everybody else, should be focused on taking the proper measures to reduce the spread of this virus, not on the strenuous physical and mental preparation that’s required to train for the Olympics. The COC should be commended for being proactive and sending that message.

“We still remain hopeful that this crisis will end in the not so distant future and that we can get back on with all of our lives,” Grunwald said. “But we have to look at the bigger picture and understand that we have to take these steps that are necessary now for the wellness of everybody. We remain hopeful that our women will be able to represent Canada, because they’ve worked so hard to get that opportunity, and we were hopeful that our men were going to have a great opportunity too to get to the Olympics. We’ll just have to hope that happens at another date.”

Things are especially complicated for the Canadian senior men’s basketball program, which has yet to qualify, though. FIBA still hasn’t postponed the tournament in Victoria, originally scheduled to take place from June 23-28, but they’re expected to do so soon.

Not only are they waiting to find out when events will be safe enough to re-schedule, they’re at the mercy of the NBA season, which is also on hold indefinitely. Depending what the league’s schedule looks like when it resumes, it could be increasingly difficult to get their NBA players – or even their head coach, Nick Nurse – on board.

Grunwald has been in contact with the Toronto Raptors head coach over the past few weeks. When Nurse took the helm of Canada’s basketball team in 2019, his contract was believed to run through the 2020 Olympics. In the event of a postponement, Grunwald insisted that Nurse still intends to be involved in anyway he can be.

The future is uncertain for Canada Basketball but they know they’re not alone in that regard. This is bigger than basketball. It’s bigger than sports.

“There’s lots of uncertainty everywhere you turn, whether it’s sports or elsewhere,” said Grunwald. “So we just have to do the right thing for the bigger picture and for the benefit of all. And then we’ll figure out where we fit into all that once the health authorities give clearance for these sorts of things to resume again.”​