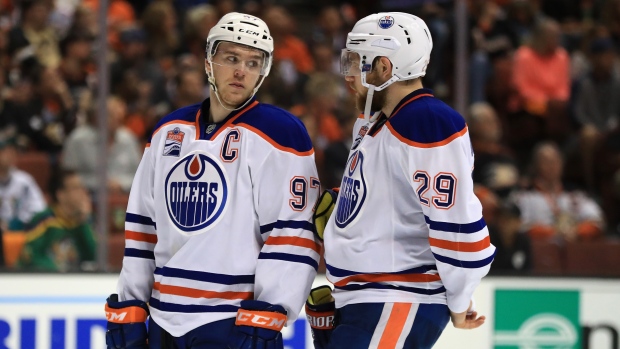 Based on point percentage, TSN Hockey’s Gino Reda, Dave Poulin and Craig Button take a look at what the first round matchups of the Stanley Cup Playoffs would be and discuss all of the series involving Canadian teams including the Oilers taking on the Canucks, Toronto facing Tampa, and Calgary taking their chances against the defending champs from St. Louis.

With the playoffs originally set to begin on Wednesday, here is what they would look like under points percentage:

Poulin: The Edmonton Oilers have the slight advantage in this one and it’s on the strength of the No. 1 and 2 scorers in the National Hockey League, Leon Draisaitl and Connor McDavid. But it’s on the strength of being able to split those two players at 5-on-5 play and Ryan Nugent-Hopkins playing with Connor McDavid and Kailer Yamamoto playing with Leon Draisaitl.

They have the No. 1 ranked power play in the league, the No. 2 ranked penalty kill and with all due respect to what Travis Green has done and the great job he’s done in Vancouver and the promise of their core group coming, I think Edmonton gets the edge in this one. Two X-factors in the series for me: Home ice for Edmonton and the goaltending potential of Mike Smith in a playoff series.

Button: I concur with Dave about Edmonton being the favourite. And I think Edmonton’s strengths – many of the same ones that Dave just pointed out – are the things that work to the Oilers’ advantage and are the Vancouver Canucks’ weaknesses. The Vancouver Canucks have an excellent power play but the No. 2 penalty kill in the league is the Oilers and that balance they have up front with that offence works to a greater advantage to the Oilers than it does to the Canucks. Oilers in the series.

Button: Well I give the Calgary Flames a 10 per cent chance. They fall short in too many areas against the defending champions and outside of something spectacular and miraculous, I don’t see them being able to beat the Blues.

Poulin: It’s a little closer for me in both series. I give Calgary a 30 per cent chance. I just think they’re in really tough against the St. Louis Blues. St. Louis can play any type of game, they play a hard game, they’ve had a consistent year and they’re going to get Vladimir Tarasenko back and I think the inconsistency of Calgary’s big scorers is going to be the factor in this. Only a 30 per cent chance for Calgary.

For Toronto, this is going to be potentially a heck of a series. They’ve got a 47 per cent chance, slight edge to the Tampa Bay Lightning in this one and for Toronto, it’s just the wild swings of their play. They can be so great on a given night but so inconsistent. And when the wave comes the other way on Toronto they don’t seem to know how to correct it. A healthy Steven Stamkos would be a factor, hey the Tampa Bay Lightning have been through everything in the last handful of years. They’re ready to get it done.