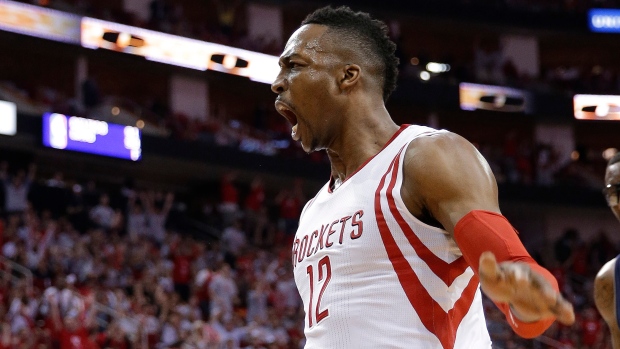 HOUSTON - Friends since preschool, but teammates for the first time since they were teenagers, Dwight Howard and Josh Smith have been itching for this opportunity.

On Tuesday night the Rockets teammates proved an unstoppable combination in a key run that helped Houston to a 111-99 victory over the Dallas Mavericks and a 2-0 lead in the Western Conference playoff series.

The Mavericks scored the first four points of the fourth quarter to take a three-point lead. But with James Harden on the bench, Houston scored the next 11 points, powered by three alley-oop passes from Smith to Howard, who had 28 points, to take a 92-84 lead with about 8 minutes left.

"Man, like they were little boys again," Harden, who finished with 24 points, said referring to their time playing AAU ball together.

Cast aside by Detroit, Smith is ecstatic to have found success in Houston. Smith, who connected with Howard on six alley-oop passes, finished with 15 points, nine assists and eight rebounds.

"We just saw something, a little wrinkle in their defence and we just tried to take advantage of it," Smith said.

Howard, who missed more than two months late this season with swelling in his right knee, played just 17 minutes in Game 1 because of foul trouble. On Tuesday night he played more than 33 minutes, showing that he's back to form after an injury-plagued regular season. He had 12 rebounds and two blocks.

"I don't care about how many points I get, my job is to make sure I dominate the paint," Howard said.

"Those are a problem," Carlisle said. "We've going to have to find a way to better combat that."

Game 3 is in Dallas on Friday night.

A fourth alley-oop connection came soon after the big run and Smith dished it to Corey Brewer for two straight dunks seconds later to make it 98-88.

Smith had another highlight with about 2 minutes left when he grabbed a bounce pass from Harden and sailed over Chandler for a one-handed dunk that made it 109-96.

"He and Dwight had some beautiful hook ups and lob passes, and he just did a wonderful job of getting into spots and making the next play and breaking down the defence," McHale said.

The Mavericks played without Chandler Parsons, who missed the game with a right knee injury. Parsons, who averaged 15.7 points in the regular season, played in Game 1 after sitting out the last six before the post-season with the same problem.

Carlisle said they are "very concerned" about Parsons and that he will be re-evaluated on Wednesday.

Rajon Rondo of Dallas got into foul trouble early, and didn't play after picking up his fourth with more than 11 minutes left in the third quarter. He finished with four points.

Dallas used a 7-2 run to get within one, but a 3-pointer by Smith extended Houston's lead to 65-61 with 8 minutes left in the third. That shot was the first of a 7-2 spurt by Houston, during which Smith scored all of the Rockets points.

Smith was at it again soon after that when he was fouled making a layup and flexed his muscles after the play as the crowd went wild.

Ellis made a layup for Dallas before Smith found Howard with an alley-oop pass that pushed the lead to 75-68 with about 4 minutes left in the third.

The Mavericks had scored five straight points late in the third when Smith saved the ball from going out of bounds by tipping it to Brewer. Smith crashed into the seats on the baseline as Brewer swished the corner 3. But Ellis made a long 3 just before the buzzer to cut Houston's lead to 81-80 entering the fourth.

The teams stayed close for most of second quarter and Harden scored his first points since midway through the first quarter with two free throws to tie it at 42-all about 3 1/2 minutes before halftime. Houston led 53-51 at halftime.

Mavericks: G Devin Harris missed Tuesday's game because of an injury to the big toe on his left foot. ... Rondo received a technical for arguing a foul early in the second quarter.

Rockets: Houston Texans star J.J. Watt watched the game from a courtside seat. He said Monday that the Rockets success is: "great for the city of Houston, so I'm really hoping that they can do big things."... Howard got a flagrant 1 foul on Nowitzki in the fourth quarter.

Carlisle wasn't in the mood to talk about Rondo after the game, and got a bit testy when asked about his effort.

"You can ask him that question," Carlisle said. "All I know ... is that we need everybody at their competitive best. This isn't about one guy who did or didn't play."

But there wasn't an opportunity to question Rondo. He walked around 20 to 30 reporters in the locker room and headed for the door as one shouted: "You have to talk to us, Rajon!" Rondo looked back, scoffed and kept walking. Amar'e Stoudemire said: "He ain't got to talk to y'all."