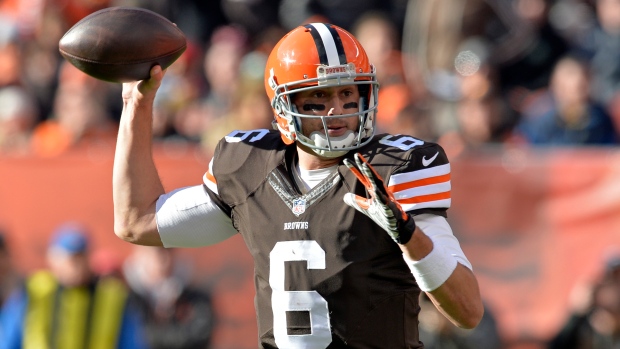 But after getting them into playoff contention, the Browns decided that despite his imperfections and recent mistakes, Hoyer is still their starting quarterback over rookie Johnny Manziel, who may be their future but isn't ready to handle the present.

The Browns are Hoyer's team for at least one more Sunday.

"I want to see this thing through," Hoyer said. "I want to finish this strong."

Cleveland's struggling veteran will start again this week against Indianapolis after first-year coach Mike Pettine and his staff decided Hoyer would be the better option down the stretch than Manziel, who flashed some Johnny Football magic last week in a loss at Buffalo.

Hoyer's poor performance against the Bills — he was pulled for Manziel with 12 minutes left in a 26-10 loss — raised the possibility that Cleveland (7-5) would make another switch at the position. The Browns have had 20 starting quarterbacks since 1999.

Hoyer spent an anxious 48 hours waiting to learn his fate.

"They weren't the easiest days of my life, that's for sure," he said. "I've been through a lot, and this is one more thing to handle some adversity and it makes you stronger. It's back to business as usual."

Pettine described the decision as difficult because of Hoyer's performance, but said coaches put more value on his experience and success.

"It wasn't perfect and he's made his share of mistakes, but he's gotten the lion's share of reps in practice and virtually all of them in games and has us in the thick of a playoff hunt," Pettine said. "That, to me, was probably the biggest determining factor."

Pettine said he told both quarterbacks his decision on Wednesday.

Manziel, who led the Browns on an 80-yard touchdown drive he capped with a 10-yard run last week, was understandably disappointed. But the first-round draft pick was encouraged by his time on the field and knows his chance may not be far off.

"Obviously, that's a decision that's made by Coach Pettine," he said. "And this week his answer was, 'No' so moving forward whatever transpires, maybe next time the answer will be, 'Yes.'"

Pettine said there was some "lively" discussion before the coaching staff agreed to stay with Hoyer, who has thrown just one touchdowns pass and six interceptions in his last three games. Hoyer will not be on a "short leash" and Pettine is confident the five-year veteran and the rest of Cleveland's offence can bounce back after a rough stretch.

Before finalizing his decision, Pettine spoke with several players, who offered their support of Hoyer.

"He's a resilient competitor," Pro Bowl tackle Joe Thomas said, "and that says everything you need to know about him because he's not the type of guy that will feel sorry for himself. He's not going to lay down. He's going to prepare even harder."

Manziel said he felt good about the way he played and figured he had done enough to make the decision tough on Cleveland's coaches.

"Just being competitive, there's a little bit of disappointment," said Manziel. "But at the same time I completely trust Coach Pettine with this team and I believe he's put us in the right situation going forward consistently."

A lifelong Browns fan, the Cleveland-area native had his boyhood wishes come true last season when he was given the starting job. He made three starts before tearing a knee ligament against the Bills.

Hoyer rehabbed tirelessly to get back and while he expected the Browns to draft a quarterback, he never imagined it would be Manziel, the immensely popular former Texas A&M quarterback and college football legend.

Hoyer beat out Manziel in training camp and has held him off again.

"I always have a fire lit," Hoyer said. "Anytime someone questions you, you want to prove them wrong. I'm sure there are people questioning me all along, not just this week, throughout the entire season."

NOTES: Pettine's not concerned about the reaction of Browns fans. The city seemed split between Hoyer and Manziel. "The Dawg Pound is happiest when we're winning," he said. "Therefore, it's what this business is all about. I think opinions will be very divided on this regardless of what had happened." ... Starting RB Isaiah Crowell was held out of practice with a hip injury. He leads the team with seven touchdowns. ... TE Gary Barnidge has a rib injury and remains day-to-day.