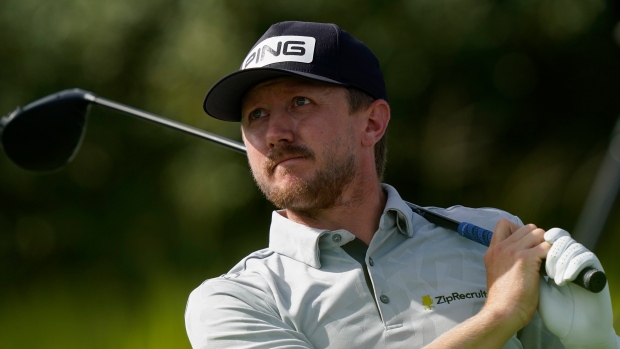 Canada’s top two male golfers stormed up the leaderboard in the first round of the PGA Tour’s last event of 2021.

Playing two different courses, Mackenzie Hughes shot a nine-under 63 while Corey Conners signed for an eight-under 62 at the RSM Classic in Georgia, leaving them in a tie for second and a tie for sixth respectively.

Hughes lit up the opening nine on the par-70 Seaside course with a six-under 30 that included an eagle on the 18th hole, his ninth of the day. He added four more birdies on this second nine with his only blemish coming on the fifth where he missed the green on his approach and failed to get up and down.

“I just did everything really well today,” said Hughes. “After 12 or 13 holes, I really felt I could have been even three or four shots better but overall, it was a good day.”

The round for the Dundas, Ont., product came despite him battling a cold. He was under the weather enough earlier in the week that he almost skipped the Wednesday pro-am but said he was on the mend.

While Hughes’s score was solid, it was not his best opening round at the RSM Classic. In 2016 he started with a 61 that helped him notch his first – and to date only – victory on the PGA Tour.

Hughes is hoping for a strong finish this week that would keep him inside the top 50 in the Official World Golf Ranking. He’s currently right at 50 and staying inside that mark at the end of 2021 would give him exemptions into a number of top tournaments including the Masters and U.S. Open.

“I’m definitely aware of the implications,” Hughes admitted. “But I’m not thinking about it when I’m on the course. I’m just trying to play good golf and we’ll look at where things are at the end of the week.”

Conners played on the par-72 Plantation course where he reeled off six birdies over a seven-hole stretch from three to nine to make the turn in 29. His marksmanship was on full display as with his longest birdie putt in that run was from just inside five feet.

On the back nine he had more opportunities but was only able to drop two birdies to finish up his bogey-free round. The Listowel, Ont., native ended up hitting all 18 greens in regulation.

“I felt like I was in really good control of my ball-striking and when that's the case, you know, hit a lot of greens and don't get yourself into too much trouble,” he stated. “So, the stress is pretty low and you're trying to convert birdie putts.”

Conners made a late decision to play the RSM Classic. His wife, Malory, gave birth to the couple’s first child last Thursday. That came after they just moved homes the week prior.

“She has some family at home helping her out,” Conners said of his wife, “and she's a saint for letting me come up here and play and I'm looking forward to having a fun rest of the week and then being a dad for a little while.”

The rest of the large Canadian contingent all managed to go under par on the two courses.

Adam Hadwin and Michael Gligic shot five under and were tied for 31st. Taylor Pendrith and David Hearn were a shot back and tied for 53rd, while Roger Sloan was tied for 83rd after a round of three-under. Adam Svensson shot a one-under 71 and was sitting in a tie for 122nd.

The players will switch courses for their second round. Compared to the perfect conditions offered up on the first day of play, Friday is expected to feature a change in direction of the wind, which will make the courses play more difficult.