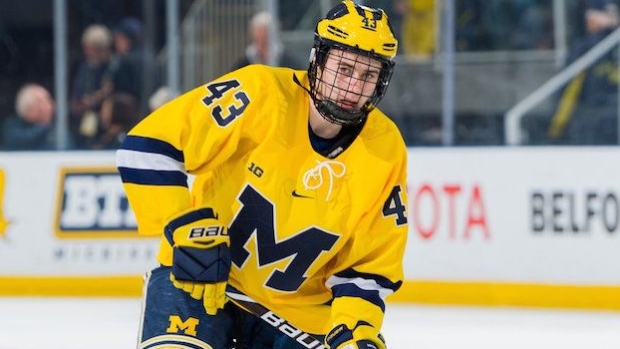 It appears the Vancouver Canucks and Nashville Predators are both likely to get a late-season boost to their lineups without moving in the trade market.

TSN Hockey Insider Bob McKenzie said Thursday that Quinn Hughes, selected seventh overall by the Canucks in 2018, and Dante Fabbro, the 17th overall pick in 2016 draft to the Predators, are both expected to sign their entry-level contracts when the NCAA season comes to an end.

"Not a surprise to anyone in Vancouver, but the expectation is that as soon as the season is over for the University of Michigan, the expectation is that sophomore player Quinn Hughes, who was drafted by the Canucks in the first round of the 2017 draft, wants to turn pro as quickly as possible," McKenzie said on Insider Trading.

"Meanwhile, Nashville's first-rounder from 2016, University of Boston junior Dante Fabbro, is also expected to turn pro. Fabbro gives Nashville a depth option on the blueline, or a potential trade chip as they start to talk about all these rentals."

Hughes, 19, has four goals and 25 points in 23 games at the University of Michigan this season. The 19-year-old defenceman posted two assists in seven games at the World Junior Championship last month with Team USA.

Brock Boeser joined the Canucks two years ago out of the University of North Dakota and made an immediate impact, posting four goals and one assist in nine games to end the season.

Fabbro, 20, has five goals and 22 points in 25 games with Boston University this season. The defenceman played on Team Canada's blueline at the Spengler Cup in December, posting two goals and three points in four games as Canada lost in a shootout in the tournament final.

The Predators signed 2017 first-round pick Eeli Tolvanen to an entry-level contract last year once the KHL season ended, but he failed to make a major impact, posting one goal and two points in four games during the regular season and serving as a healthy scratch throughout the playoffs.

Mike Chambers of the Denver Post wrote Thursday that Colorado Avalanche defenceman Cale Makar is also expected to sign his entry-level deal once his season ends at UMass-Amherst. Makar, selected fourth overall in the 2017 NHL Draft, has nine goals and 30 points in 25 games this season.

Makar was ranked third among NHL-affiliated prospects by TSN Director of Scouting Craig Button last month. Hughes was ranked eighth on the list, while Fabbro was listed at No. 42.