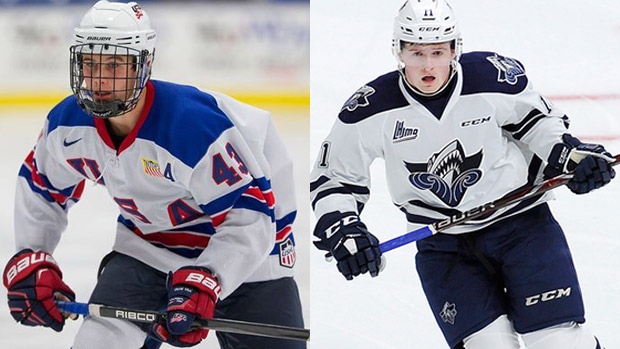 The World Under-18 Championship gets underway this week in Russia, providing an excellent showcase not only for this June's NHL draft prospects, but a couple of can't-miss players in the years to follow.

It all begins Thursday with the United States taking on Canada (10:30am et/7:30am pt on TSN and TSN GO), headlined by two elite talents in centre Jack Hughes and winger Alexis Lafreniere.

Simply put, Hughes is exciting. He dominated the Under-17 tourney in November, leading the U.S. to a gold medal. He also dominated the USHL this season as a 16-year-old, scoring 21 goals and tallying 33 assists in 27 games with the US NTDP team.

Hughes' skating is tremendous while his edge work, lateral movement and change of speed make life a nightmare for defenders. He makes plays at high speed and in traffic and if he doesn't have the puck, he's about to have it.

Hughes also has outstanding hands and can make all manner of plays with vision and anticipation. He creates opportunities very few players are capable of – and I'm talking about the best of the best in any league. If there is a better player player (delete) available for the 2019 Draft, I have not seen him. Jack is special and his competitive level is every bit as high as his talent.

For Team Canada, Lafreniere is part of a strong lineage of Rimouski Oceanic stars – following Vincent Lecavalier and Sidney Crosby - who were taken first overall in their respective drafts.

Lafreniere has a game that's comparable to Jamie Benn – he can score from multiple areas (from the circles down and inside the dots) and has great hands. He can also make plays, which makes him a dual threat. Lafreniere can play in all situations because he's so smart, takes whatever is there for him and carries a competitive spirit and fire that makes him very challenging to play against. Like Hughes, I have not seen a player at this time who is better than Alexis for the draft in 2020.

The scouting list doesn't end with Hughes and Lafreniere, as there are plenty of great players from this year's draft class to keep an eye on at the tournament:

Andrei Svechnikov, RW (RUS) - This is his third Under-18 tourney. The Barrie Colts winger is the headliner for the host Russians with a blend of skill, sense, power and drive that reminds me of Marian Hossa's style. He's a factor in the game in all areas. Svechnikov will be an early pick in the NHL Draft and will most likely play in the NHL next season.
Craig's List Rank: 3

(Editor’s Note: As of Wednesday night, it appears Svechnikov is hurt and won’t play in this year’s tournament)

Adam Boqvist, D (SWE) - Adam is a dynamic defenceman who has a style reminiscent to Erik Karlsson. He has a daring element to his game with an ability to make plays on the move and be an ever-present threat when he has the puck. He possesses a very good shot and can score goals.
Craig's List Rank: 6

Oliver Wahlstrom, C (USA) - He has excellent hands and the ability to maneuver the puck in tight areas. Wahlstrom also has an exceptional shot with a quick release, can score from 40 feet out and flat out beat goalies with his accuracy and velocity. His release conjures up images of Hall of Famer Mike Bossy.
Craig's List Rank: 9

Bode Wilde, D (USA) - Wilde has a nice combination of skill and size and has an ease to his game where he can make things look easy. In that regard, he reminds me of Brent Seabrook at that same age – calm, cool and collected but able to push his level of play higher when the demands become greater.
Craig's List Rank: 11

Serron Noel, RW (CAN) - Has a fantastic blend of size, skill and sense. Noel can score goals, make plays and be a powerful force in the game. He has a great sense of the game at all times and he continues to improve and show the potential of a top winger. His improvement has been as strong as any player for this draft.
Craig's List Rank: 16

Ty Smith, D (CAN) - He's a picture of composure on the blueline – the next time he panics on the ice may very well be the first. Smith controls the puck and the pace of play extremely well and when he's on the ice, there's a strong sense of control. His skating is very good - he can maneuver out of trouble and be very elusive.
Craig's List Rank: 19

Joe Veleno, C (CAN) - Veleno captained the 2017 gold medal-winning team at the Ivan Hlinka tourney. He was traded to Drummondville this season, where he played for World Junior head coach Dom Ducharme and his game progressed nicely. He's very smart and determined with a solid base of skill and wanting to be a factor in the game.
Craig's List Rank: 27

Jesperi Kotkaniemi, C (FIN) - He's been very good as a 17-year old in the SM Liiga and his development has been excellent. Watching him play, I see a style that's eerily similar to Anze Kopitar. And like Kopitar, Jesperi is a strong all-around player.
Craig's List Rank: 10

Joel Farabee, LW (USA) - There's little to no flash in his game but he's exceptionally smart and not only complements all types of players, but also capable of being a strong player in all situations. If something positive is happening, he's the guy at the heart of it. He helped the U.S. win gold at the Under-18s last year.
Craig's List Rank: 15