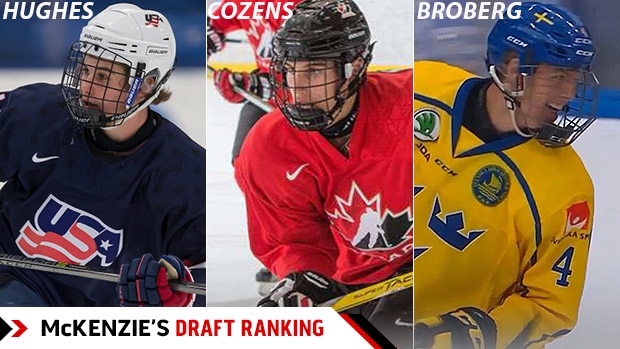 Welcome to the Jack Hughes Draft.

It’s still nine months away, of course — June 21-22 in Vancouver, to be precise — but for the fourth time in the last five years it seems highly likely, if not pre-ordained, that the top prospect going into the NHL season will be the No. 1 pick coming out of it at the draft.

So, until someone gives us reason to believe otherwise, the young American centre Hughes will get the same treatment and billing afforded to Connor McDavid in 2015, Auston Matthews in 2016 and Rasmus Dahlin in 2018.

That puts him in some extraordinary company.

Swiss centre Nico Hischier, who wasn’t even rated in TSN’s preseason Top 10 for the 2017 draft, upended what was initially, though somewhat tentatively, proclaimed the Nolan Patrick Draft. Hischier, of course, went first overall to the New Jersey Devils and Patrick second to the Philadelphia Flyers.

So anything is possible for 2019, but Hughes has looked like the real deal now for the last two seasons and it would be a major shock if he’s not a wire-to-wire No. 1.

Unlike McDavid, Matthews and Dahlin, all over 6 feet tall, Hughes is not so physically imposing. At 5-foot-10 and 168 pounds, Hughes is lot closer in physical stature to Patrick Kane, Mitch Marner or Clayton Keller.

NHL scouts say Hughes is forecast to be a game-changing, potentially franchise-altering offensive star with a big “wow” factor.

Ten out of 10 NHL scouts surveyed by TSN, in order to determine the preseason Top 20 for 2019, had Hughes at No. 1, a clear level above a full group of prospects who are in the mix for top five draft status.

“Special player,” one scout said of Hughes. “A difference-maker.”

Hughes isn’t McDavid, who was labeled as a “generational” talent. But one could argue how “special” is special if there seems to be a “special” player — McDavid, Matthews and Dahlin — almost every year. It simply underscores the quality and quantity of elite young talent coming into the league on a consistent basis.

What Hughes lacks in size he more than compensates for with dynamic speed and skill, elite hockey sense, tenacity and the ability to make all his teammates that much better.

Like those bigger No. 1 picks before him, Hughes has demonstrated an ability to dominate his competition even when he’s playing against older, more experienced players. Such was the case at the World Junior Championship Showcase tournament in Kamloops in early August.

“A lot of the best under-20 talent was there and [Hughes] was the best, at age 17,” another scout said. “That’s the definition of special — a player who keeps moving up in age or competitive class and still stands out.”

He was also the dominant player, as an underager, at the World U-18 Championship last spring.

Hughes also has a chance of being the flag-bearer for one of the first families of U.S. hockey. Jack’s older brother, Quinn, was the seventh-overall pick last June, to the Vancouver Canucks, and younger brother Luke is currently a 15-year-old defenceman playing for the Detroit Little Caesars minor midgets.

Beyond Hughes, scouts are excited by the class of 2019 and believe the remaining top five berths are very much up for grabs. As many as a dozen prospects, including each player in the Top 10, got at least one mention from TSN’s scouting panel as a Top-Five pick.

It’s would appear to be a bounce-back year for Canada, and in particular the Western Hockey League. Only two Canadians were selected among the Top 10 in the 2018 draft and the WHL didn’t have a forward selected in last year’s draft until the third round. This year there are six Canadians in the Top 10, including three WHLers in the top six.

Dylan Cozens, a 6-foot-3 centre from the Western League’s Lethbridge Hurricanes, is No. 2 on TSN’s pre-season list. Eight of 10 scouts surveyed had last year’s WHL rookie of the year in their top three. Cozens, from Whitehorse in Yukon, plays an imposing two-way game.

Kaapo Kakko, a 6-foot-2, 194-pound Finnish right winger, is No. 3 and the latest in a long line of his countrymen to have top-of-the-draft potential. A Finn has been chosen in the top four in each of the past four drafts: Jesse Puljujarvi, Patrik Laine, Miro Heiskanen and most recently Jesperi Kotkaniemi. Kakko is a high-end offensive talent who is equal parts goal scorer and playmaker. He excelled as an underage last spring at the World U-18 Championship.

Vasili Podkolzin, a 6-foot-1, 183-pound Russian winger from SKA St. Petersburg, is No. 4. The left-shot right winger was an absolute star at the Hlinka-Gretzky Cup in August in Edmonton. He dominated all over the ice, demonstrating elite offensive talent with multiple highlight reel plays and productivity.

Kirby Dach of the Saskatoon Blades, a 6-foot-3, 199-pound centre, rounds out TSN’s Top 5. Dach is a terrific skater who has high-end skill as a playmaker. Seven of 10 scouts surveyed by TSN had Dach as a top six pick in this draft.

There are no defencemen ranked in the preseason top five, but two hold down Nos. 6 and 7 and both are threats to break into the top five.

Bowen Byram of the Vancouver Giants is No. 6. The 6-foot, 194-pound blueliner projects as a top pair NHL defenceman who is as effective with the puck as he is without it and can impact the game in all three zones.

Swede Philip Broberg of AIK is an elite skater with tremendous offensive instincts. The 6-foot-3, 199-pounder is a serious challenger to Byram as the consensus top defenceman in the draft.

“Outside of Hughes at No. 1,” one NHL scout said, “I think you’re going to see a lot of movement and jockeying for position amongst the next half-dozen or so prospects.”

To that point, every prospect ranked in TSN’s preseason Top 10 got at least one vote. Byram, for example, was a Top 5 prospect on five ballots.

The rest of the Top 10 is rounded out by three Canadians, one from each of the Quebec, Western and Ontario leagues.

As much as it’s a better year for Canada, and the WHL, it’s really a banner year from the U.S. National Development Team Program U-18 team. Seven of the top-20 ranked prospects on TSN’s preseason list play on that team, including, of course, Hughes at No. 1.

But it’s also a diverse multi-nation look at the top of this draft. With Hughes (USA), Cozens, Dach, Byram (Canada), Kakko (Finland), Podkolzin (Russia) and Broberg (Sweden) all ranked in the top seven, it’s conceivable the first five players taken in the draft could be from five different countries.

Outstanding skill with a fantastic imagination, a determined spirit and an electrifying presence.

High-end skill with the excellent sense that allows him to adapt to any linemate and any situation. He's unique in that he's a winger who can play centre.

He's involved in every part of the game in all situations. Skilled, smart, driven and has the ability to take his game to a level above that required.

Excellent skill with an ease to his game. He is growing more into a player that is capable of overwhelming opponents and having a significant impact.

Excellent skater with an economy to his game because of his feel and sense.Effective in every zone and can play the big minutes along with the important minutes.

Outstanding skater who does it defensively, offensively and in transition with the ability to impact the game in all aspects.

A stealth shooter who is able to find the space at the right times to be a threat and take full advantage of opportunities.

Highly competitive with a relentless determination and finds ways to make contributions in all areas of the game.

Excellent sense and feel for situations and is able to make the plays that create opportunities. Very good skills and plays with a real confidence.

Excellent skater who can close defensively and take the puck into positions where the team gains advantages. Has a physical element to his game.

Versatile and has the sense to make plays at centre or on the wing. Very good in tight spaces and has a quick mind to recognize opportunities and execute.

Very smooth with an effortless skating style and a calm poise about him when he has the puck. Vision and hand skills to be productive inside the offensive blue line.

Has very good skills with an excellent shot and release. Imposes himself and makes the game hard for opponents defending him because of skill, sense and power.

Scoring winger who can beat defenders with speed. He drives the net and is hard to deter because he has the size and the hands to score in many ways.

His approach to playing is simple - find the straight line to get to advantageous positions. Smart wih good skills and has a fierce determination about him.

Elite goal scorer who always shows up at the right time in the right places and never engages on an opponent's terms. Excellent sense and anticipation.

Very smooth skating centre with quickness and very good hands. Creative and is smart with the ability to make plays on the move and in tight spaces.

Big, rangy, good-skating defenceman who doesn't give opponents a lot of room and is very good at closing plays and getting the play moving in transition.