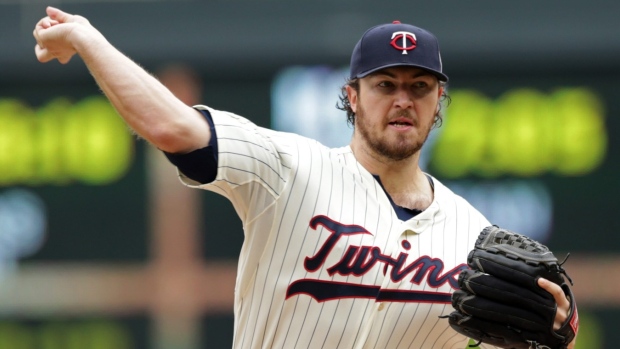 MINNEAPOLIS - The rain dripped off the brim of his cap as Phil Hughes walked off the mound.

An hour-plus delay meant the last start of his first season for Minnesota was over. That half-million-dollar bonus stayed one out away. He still earned a nice prize: the major league record for strikeout-to-walk ratio.

Hughes struck out five without a walk over eight innings, and the Twins beat the Arizona Diamondbacks 2-1 on Wednesday afternoon.

Manager Ron Gardenhire said Hughes would've returned for the ninth on a dry day, but the 66-minute delay ended that. Gardenhire also said he wouldn't try to get Hughes in any of the team's last four games at Detroit. Hughes didn't seem to mind.

"Finishing that out today is a pretty cool way to do it," he said.

Hughes had been aware of his chance at the record, too, for the last few weeks. Every three-ball count created some anxiety.

"You can't just lay pitches down the middle," he said.

Hughes (16-10) finished his first year with the Twins with the same number of wins and walks. With 186 strikeouts, his 11.63 ratio became the best of all time for pitchers with a qualifying amount of innings. Hughes beat Bret Saberhagen, who had 143 strikeouts and 13 walks for the New York Mets in 1994 for an 11.00 ratio.

Hughes allowed only a sacrifice fly by David Peralta in the sixth.

"Everybody's looking from the dugout and trying to keep off that borderline high pitch, but with the way it comes out, he's sneaky, and it makes it hard to do," Diamondbacks manager Kirk Gibson said.

Jared Burton closed for his third save. Hughes completed at least seven innings over each of his last nine starts, quite the rebound from a rough 2013 season in New York for the Yankees.

"He's been our guy all year long that you count on," Gardenhire said.

Diamondbacks starter Vidal Nuno escaped with only two runs allowed in five innings despite loading the bases in the first two frames. Nuno finished 0-7 with a 3.76 ERA in 14 turns for the Diamondbacks since he was acquired July 6 from the New York Yankees in the Brandon McCarthy trade. He went 2-5 with a 5.42 ERA in 17 appearances for the Yankees.

Paid attendance was 29,445 for the home finale, though the number of people in the park was probably one-third of that and far less once the rain came. That gave the Twins a season total of 2,250,606 tickets sold, the fewest in five years at Target Field and the lowest number since 2004.

Diamondbacks: 2B Aaron Hill didn't play after he dislocated the top of his right pinky finger Monday in an eighth-inning headfirst slide into home.

Twins: Mauer's bruised right elbow was "a little sore," Gardenhire said, from a pitch that hit him Tuesday in the first inning. The manager wanted to keep Mauer fresh for the weekend for an optimal lineup against Detroit with the AL Central race ongoing.

"I want him playing all those games," Gardenhire said.

In the sixth inning, 3B Trevor Plouffe left the game with a broken left forearm. He was struck by A.J. Pollock's knee during an attempted tag as Pollock slid into third base.

Twins: Minnesota has four games left against the Tigers, who hold a slim lead over Kansas City, with rookie Trevor May (3-5, 8.39) pitching Thursday at Detroit against Tigers ace Max Scherzer (17-5, 3.19). May had a three-start winning streak snapped last Saturday against Cleveland, giving up seven runs in 4 2-3 innings.

Diamondbacks: Arizona has Thursday off before returning home to finish the season against St. Louis, the NL Central leader still seeking to clinch a third straight division title. Trevor Cahill (3-12, 5.55), who is winless in his last six starts with 25 earned runs surrendered in 28 1-3 innings, will start for Arizona against Michael Wacha (5-6, 3.18).