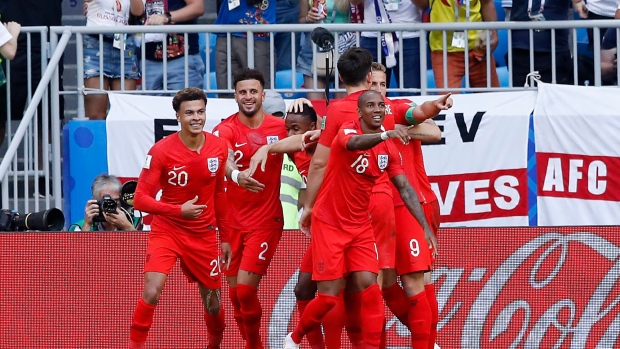 Harry Maguire and Dele Alli scored with headers in a 2-0 win over Sweden on Saturday, earning England's youthful team a match against Croatia for a place in the final on July 15.

"We looked composed," England captain Harry Kane said. "We looked like we controlled the game."

England's fairly muted celebrations reflected the routine nature of the victory over a hard-working Swedish side that had already gone further than expected in its first major tournament without Zlatan Ibrahimovic.

England's deep run also is a surprise. Not even the England side containing stars like Beckham, Steven Gerrard and a young Wayne Rooney ever got this far at a major tournament.

The 1966 World Cup champions last reached the semifinals in 1990, losing the first of a series of haunting penalty shootouts. In 2014, the team didn't even make it out of the group stage.

Yet the performances of Gareth Southgate's squad — the second youngest at the tournament — are being celebrated wildly back home. Even at Wimbledon, the home of lawn tennis, updates of England's goals were spread by fans watching or listening to the match on their cellphones.

"I know the fans here are enjoying it," Kane said. "The fans at home, I'm sure we'll see some videos tonight of them enjoying it."

The chant of "On our way, on our way, to Moscow, on our way" came from England fans in one corner of the Samara Arena throughout the match, and the team's march to the Russian capital is being fuelled by goals from set pieces.

There was another against Sweden, with Maguire heading in a driven corner from Ashley Young in the 30th minute. It was England's eighth set-piece goal of its 11 in Russia, and the centre back's first in international soccer.

The standard of England's crossing has particularly stood out this tournament, and Alli added the second goal by meeting a far-post cross from midfielder Jesse Lingard with a powerful header in the 59th. At 22, Alli became the second-youngest scorer for England at a World Cup behind Michael Owen.

"We knew set plays would be key," Maguire said. "And also that little ball that Jesse sent in for Dele, that was great. We worked on that in practice."

It proved to be a match too far for the Swedes, who advanced further than they ever did with Ibrahimovic — the team's star for more than a decade — by being compact and hard to break down. That helped them win a two-leg playoff against Italy to get to the World Cup, top a group containing Germany, and then beat Switzerland in the round of 16.

They began solidly against England in a slow and sloppy start to the game that resembled a pre-season friendly at times, only to be outdone by a goal Sweden isn't used to conceding.

Although Sweden rallied in the final 30 minutes, forcing two good saves from goalkeeper Jordan Pickford, England comfortably held on for its first shutout of the tournament.

England forward Raheem Sterling has yet to score at the World Cup from his unusual position as the support striker to Kane, and his finishing let him down against Sweden.

Set clear by Jordan Henderson's long pass over the defence late in the first half, Sterling tried to get around Sweden goalkeeper Robin Olsen but was stopped. Sterling got hold of the loose ball but his shot was deflected over.

Sterling's movement was very good, though, causing Sweden's slow defence problems throughout. He is likely to retain his starting place for the semifinals.

Virtually from kickoff, Sweden sent long passes forward to tall striker Ola Toivonen and looked for a flick-on. It was a sign of what was to come — direct balls, long throws, pressing — but those basic tactics didn't trouble England.

The Sweden team got in a huddle after the game and Andersson spoke to the players.

"We were sad and we're disappointed," Andersson said, "but we mustn't forget we put in an excellent performance. I wanted to say that already on the pitch, too, to our players."

Sweden last reached the World Cup semifinals in 1994, and ended up finishing third.