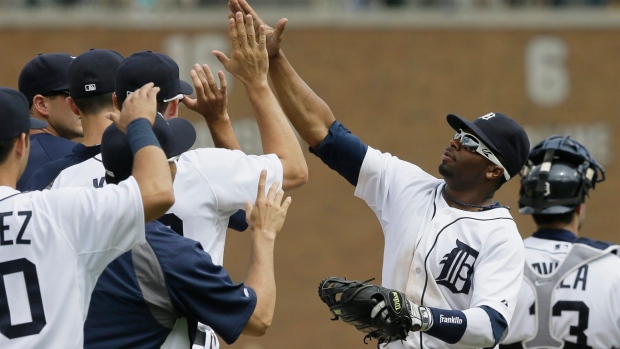 The Tigers celebrate , The Canadian Press

A few more performances like the one Wednesday might mean he's heading in the right direction, however.

Verlander overcame a pair of long home runs in the first inning and left with a comfortable lead after the sixth as the Detroit Tigers beat the Oakland Athletics 9-3 for a three-game sweep.

Verlander (7-7) started the day looking like the pitcher who has been searching for his mechanics for most of the season. Coco Crisp began the game with a shot over the access tunnel down the right-field line, and Brandon Moss went even deeper into the right-field stands with two out.

That, though, was the last time the A's scored off the pitcher who has dominated them in each of the last two postseasons. Verlander wasn't sharp, allowing nine hits, but he didn't walk a batter.

"I didn't make a big adjustment, I just got more into my rhythm," he said. "My changeup wasn't good, but I was able to throw my slider to lefties, where usually that's just fastball and curve."

With a .500 record and a 4.71 ERA, even Verlander's years of dominance aren't going to get him to Minnesota later this month for the All-Star festivities.

"I'm not going this year — I can pretty much guarantee that," he said. "I didn't have a good first half, and I know that."

"It's going to be the first time I get that weekend off in a while. It will be nice to get that time where I don't have to tax my arm. I've put in a lot of extra work this year, trying to find my mechanics, so the rest will be good," he said.

Torii Hunter hit three RBI singles and capped a six-run burst in the sixth inning. The three-time AL Central champion Tigers won for the 11th time in 13 games. The division leaders reached the halfway mark with a 47-34 mark.

Oakland still has the best record in the majors despite its stumble at Comerica Park.

The Tigers have eliminated Oakland from the post-season in each of the last two years. Detroit won this year's season series 4-2, but with both teams leading their divisions, there's a chance of a fourth October meeting since 2006.

"We won three of four here last year during the regular season, but they turned the tide on us this time," Oakland manager Bob Melvin said. "This wasn't a very good series for us — getting swept never feels too good — but we do want to play them again this year."

If there is a third matchup, the A's won't expect this version of Verlander.

"For guys like that, there is a regular-season version and a playoff version," Moss said. "I guarantee you that when playoff time comes, he's going to be dominant."

Hunter started at designated hitter for the first time in his two seasons with the Tigers. Hunter, who turns 39 on July 18, came into the game hitting .185 in his last 32 games and has struggled badly in right field.

The Tigers had a rough time, too, going 9-20 in late May and early June.

"I think it was really good for our team to go through some of those tough patches," second baseman Ian Kinsler. "It taught us a lot about what type of team we are, that we could come out of that thing and still be one of the best teams in baseball."

Jesse Chavez (6-5) struggled for the second straight start, giving up five runs in five-plus innings. Reliever Jim Johnson, who replaced him, allowed four runs while only getting one out.

"We got the lead in the first, and I gave it back," Chavez said. "That's the biggest thing. As a starter, when you get the lead, you want to hang on to it."

NOTES: J.D. Martinez sat out with soreness in his side, but Tigers manager Brad Ausmus said it was purely precautionary and that he should be back at DH on Thursday. ... DH Yoenis Cespedes (hamstring) and C Norris (back) both returned to the lineup for Oakland. ... The A's return home for a series with Toronto, with Sonny Gray (7-3) scheduled to face R.A. Dickey (6-7). ... Detroit remains home for a four-game weekend series with Tampa Bay. Max Scherzer (9-3) is scheduled to pitch the opener against Erik Bedard (4-5).