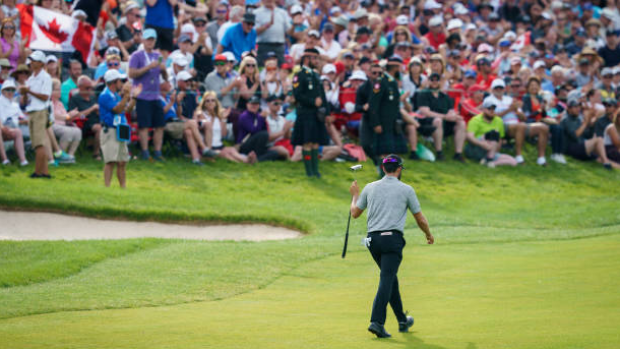 For the first time since 1944, there will be no RBC Canadian Open.

What had been speculated for some time was made official on Thursday morning when the PGA Tour announced that the Canadian championship will not be held in 2020.

The decision came after the Tour, Golf Canada and RBC went through every available option to try to keep the event on the schedule. In the end, the government regulations in place during the COVID-19 pandemic made it impossible.

“We were hopeful for the opportunity to proceed and we had great collaboration with the Tour and Golf Canada, and looked at every possibility,” admitted Mary DePaoli, the executive vice-president and chief marketing officer of RBC, “but it just proved to be impossible under the current situation. First and foremost, we have to follow the guidelines of safety.”

“We were in daily dialogue and we looked at various scenarios optimistically,” said Laurence Applebaum, the CEO of Golf Canada. “The federal quarantine and the provincial and city regulations were just obstacles that were too big to overcome. It’s disappointing for our fans as we were building to a great event.”

The tournament was scheduled for June 11-14 at St. George’s G&CC in Toronto and looked to build on the success of the 2019 event at the Hamilton G&CC. In addition to golf, this year’s tournament was to include a two-night concert series featuring Keith Urban and The Chainsmokers.

The field for this year’s tournament was also going to feature many of the game’s top stars. That included defending champion Rory McIlroy along with RBC ambassadors Dustin Johnson, Webb Simpson, Brandt Snedeker, Graeme McDowell and Jim Furyk.

“We were headed down such a great path,” said Applebaum. “Last year we had Rory flirt with a record score and there were Canadians in contention. Every indication was that 2020 was going to build on that.”

The cancellation will have effects on a variety of levels beyond those playing in the tournament. Fans who bought tickets (which will be refunded), vendors who were doing business, and volunteers, many who have made the tournament a staple of their summer for years, are all being impacted. Perhaps most important are several charities that raise money through the RBC Canadian Open.

Applebaum said Golf Canada is trying to find silver linings in the decision and staying in contact with everyone who is a part of the tournament.

While the RBC Canadian Open won’t be held in 2020, the new PGA Tour schedule does include a tournament backed by the bank. The RBC Heritage was to be played scheduled for April 13-19 but has been re-scheduled to June 15-21. It will be played in Hilton Head, S.C.

“Our position was to have both events to proceed,” said DePaoli, who said RBC, as one of the Tour’s strongest backers, lobbied the PGA Tour to re-instate the RBC Heritage. “It’s been a whirlwind of emotions over the last month.”

The tournament will have a different look. It’s one of the first four events on the new PGA Tour schedule that will be played without any fans.

Even with that, there are expected to be strict regulations in place for all who are involved with not only the RBC Heritage but every PGA Tour event on the revised schedule.

“The health and safety of all associated with the PGA Tour and our global community continues to be our No. 1 priority, and our hope is to play a role – responsibly – in the world’s return to enjoying the things we love,” said PGA Tour commissioner Jay Monahan in a release. “Today’s announcement is another positive step for our fans and players as we look toward the future, but as we’ve stressed on several occasions, we will resume competition only when – working closely with our tournaments, partners and communities – it is considered safe to do so under the guidance of the leading public health authorities.”

To that end, DePaoli stressed that even next year’s RBC Canadian Open will proceed with caution in this time of uncertainty.

“We are enthusiastic and realistic,” she stated. “We will prepare understanding what the practical realities will be and, first and foremost, look out for the safety of everyone.”

Next year’s tournament will be held at St. George’s G&CC with Islington G&CC serving as the site of the driving range. There is no site yet for the 2022 tournament, while Hamilton G&CC will host in 2023.