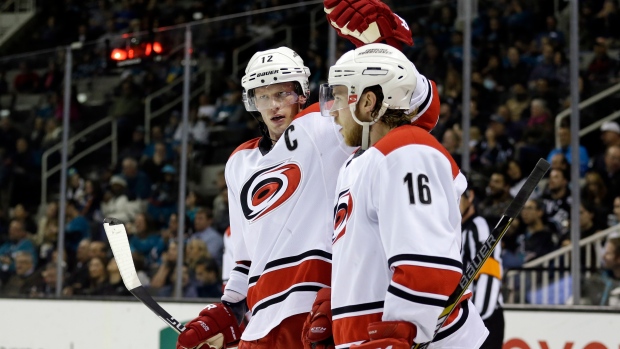 The only remaining players from the club's lone Stanley Cup championship team a decade ago are entering the final season of their lengthy contracts.

Both players said Tuesday that they're keeping their focus on the things they can control on the ice.

Staal says that if there's no resolution before the season, he's "sure I'll get those questions" throughout the year and added, "how many different answers can you give?"

"They give people something to talk about," Peters said, "but I think everybody's pretty comfortable going into the year the way they are."

Staal will make $9.5 million in the last year of a seven-year deal he signed in September 2008. The Hurricanes will pay Ward $6.8 million in 2015-16 in the final year of the six-year contract he signed a year later.

"I'm just going to try to take care of what I can control, and that's just preparing the best that I can to be great this year, and I feel when the time is right that will all take care of itself," Ward said. "My focus is on the team and trying to get off to a good start, and I'll keep it that way."

There's no question that Staal and Ward have been two of the franchise's most visible faces during the past decade.

Staal, 30, took over as team captain in 2010, has led the team in scoring in seven of his 10 seasons and is the only player in club history with four straight All-Star game appearances. Ward, 31, won the Conn Smythe Trophy as the MVP of the playoffs as a rookie in 2006.

"For me to have been a part of this organization for as long as I have, and played with one team, that doesn't happen a ton in the game anymore," Staal said. "So for sure, I'm grateful as far as that goes.

"You have one career, you have one chance at being an NHL hockey player and for me, I want to continue to get better, and I feel like I have a lot of great hockey left," he continued. "And I want to help this team get back to the playoffs and have another chance at a Stanley Cup."

The Hurricanes sure hoped playoff appearances would become the norm several years ago when they invested a total of roughly $94 million in their then-young stars.

They gave Staal his $57 million contract a month before the start of a season that ended with a run to the Eastern Conference final and included two Game 7 wins in 2009. Ward's $37 million deal came that September, and at the time he said the pressure was on him to play like an elite goalie "now that I'm being paid like one."

They haven't been back to the playoffs since, missing six straight postseasons — the longest active streak among Eastern Conference teams.

Carolina will celebrate the 10th anniversary of its Cup victory this season and Ward says his main goal is helping the Hurricanes reach that level again.

"It definitely has been a long road — it seesm like so long ago that that took place, but it definitely brings you back to those great memories that you had," Ward said. "I would love nothing more than to get back and do that all over again, and not only do it again, do it here. I'd love to see us get off to a good start and push to make the playoffs and see the city rally the way they did 10 years ago.

"I don't know if there was any better place to play hockey" than Raleigh in 2006, he added, "and that's what we're trying to strive for."