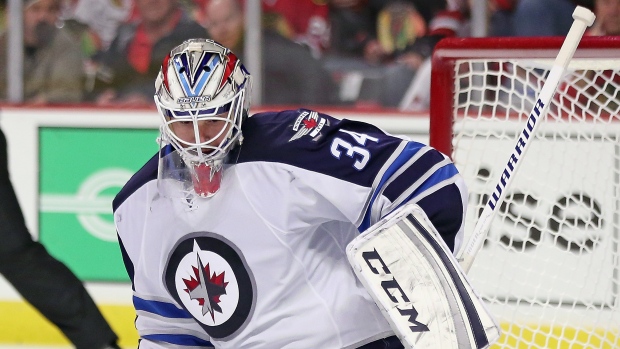 CHICAGO - Michael Hutchinson had a perfect night against the Chicago Blackhawks he won't forget.

Hutchinson stopped 33 shots for his first career shutout, and Michael Frolik scored 20 seconds in on the first shift of the game to lead the Winnipeg Jets to a 1-0 win over the Blackhawks on Sunday night.

Hutchinson was solid in just his second start, first complete game and third appearance this season. Even if the Blackhawks have been struggling to score recently, the 2010 and 2013 Stanley Cup champions are one of the NHL's most talented offensive teams.

"To get your first win of the season and have it be a shutout, especially in this building, is definitely something really special," Hutchinson said. "It's something you're going to remember for the rest of your athletic career.

"I'm going to cherish this moment."

The Jets wrapped up a perfect weekend as they extended their point streak to five games (4-0-1) and recorded their second shutout in two nights. No. 1 goalie Ondrej Pavelec beat the Rangers 1-0 in New York on Saturday in a shootout.

The back-to-back shutouts are the first for the Jets since October 2006 when they were the Atlanta Thrashers. It is the third time it has happened in franchise history.

The 24-year-old Hutchinson entered having played only 40 minutes this season, but he backstopped the Jets in a tight-checking finale of a 3-0-1 road trip that moved them over .500.

"We've really jelled together as a team on the road," Hutchinson said. "I think it shows on the ice.

"We're really committed to team defence. It's unfortunate we haven't scored a lot of goals, but we're still able to get points, which is the main thing."

Corey Crawford stopped 26 shots in his second start in two nights after he missed six games with an upper-body injury. The Blackhawks lost their second straight and are 2-5 in their last seven.

Chicago was beaten 1-0 for the second consecutive home game as both teams played for the third time in four nights.

"We had that first tough shift, and after that they had that perfect road game going," Blackhawks coach Joel Quenneville said. "They had that lead, and coming off that shutout (Saturday) night, got excited and checked pretty well."

The Blackhawks entered leading the NHL with an average of 38.9 shots per game, but were only 21st at 2.46 goals.

They had a hard time against Hutchinson and the scrappy Jets. Chicago was unable to generate much traffic in front of the net or pounce on rebounds.

"Again, we get good chances and a lot of pucks around the net, and it's not going in," Chicago captain Jonathan Toews said. "We need to find a way to break out of that funk as far as goal scoring goes."

The Jets got all the offence they needed early as they moved straight into the Chicago zone off the opening faceoff.

Frolik, a former Blackhawks player, skated across the crease, closed in from the left side and lifted the puck past Crawford's glove as the goalie sprawled while trying to stop the shot.

Chicago's Patrick Sharp broke in alone with 3:40 left in the first and faked Hutchinson to the ice, but his shot clanked off the right post.

Toews fired a drive from the left circle off the left post midway through the second during a Chicago power play. Hutchinson stopped another prime chance by Sharp moments later.

The Blackhawks shot wide on some of their best chances in the third period.

NOTES: Hutchinson was pulled early in the second period of his only previous start this season, a 4-1 loss at Los Angeles on Oct. 12, after he allowed three goals on 13 shots. He also replaced Pavelec in the third period of a 4-2 loss to Tampa Bay on Oct. 24. This was Hutchinson's sixth career NHL game. ... Before the game, Blackhawks RW Marian Hossa was honoured by the team and the NHL for becoming the 80th player to record 1,000 points. He reached that mark on Thursday in Ottawa. ... Chicago D Niklas Hjalmarsson skated with a visor after sustaining a cut under his left eye in Toronto on Saturday. Blackhawks D Michal Rozsival was a healthy scratch.