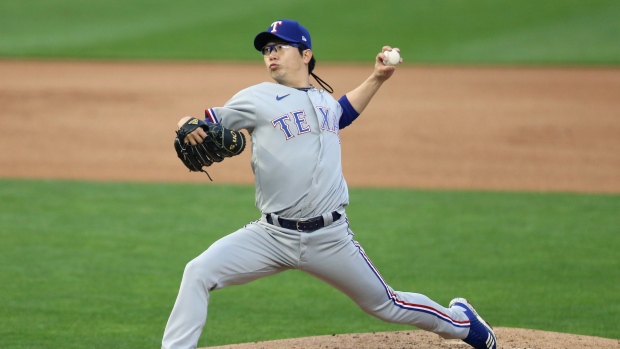 MINNEAPOLIS — Hyeon-Jong Yang made his first major league start after 14 years in the Korea Baseball Organization, getting the Texas Rangers off to a strong start in an eventual 3-1 win against the Minnesota Twins on Wednesday night.

Yang, who came to his postgame video conference wearing the cowboy hat representing the Rangers player of the game, opened the game by striking out Byron Buxton, Josh Donaldson and Nelson Cruz.

“Three strikeouts really helped me to find my own rhythm,” Yang said through an interpreter. “Although I didn’t pitch for a whole lot of innings, but I think I’m pretty happy with the result I had.”

John King (3-1) picked up the win in relief of Yang, giving up just two hits in 2 2/3 innings. Ian Kennedy notched his ninth save.

Nate Lowe had a pair of hits and scored a run for Texas, who won for the fourth time in five games. The Rangers scored their runs on a fielder’s choice, wild pitch and sacrifice fly.

“Not being nitpicky, but I got 14 really hard-hit balls tonight,” Texas manager Chris Woodward said. “I feel like we’re kind of on the verge. We only struck out four times and we put a lot of hard balls in play; a lot of line drives, lineouts, deep fly balls. It’s just a matter of time before those start falling and we put some crooked numbers on the board.”

Lewis Thorpe (0-1) surrendered three runs on five hits in five innings in his return to Minnesota. Thorpe was recalled earlier in the day from Triple-A St. Paul for his third stint with the Twins this season as manager Rocco Baldelli made the decision to push his rotation back a day.

“We didn’t create enough when we needed to,” Baldelli said. “We got some guys on. We had a few good at-bats and on a night like this when we have a right-handed hitting lineup out there and we’ve got a chance to face a bunch of lefties, we expect more from ourselves in a lot of these at-bats.”

Yang won the regular-season MVP and Korean Series MVP in 2017, leading the Kia Tigers to the KBO championship. He was a two-time ERA leader in the league and twice won the Choi Dong-won award, the Korean equivalent to the Cy Young award.

The Gwangju, South Korea native signed a non-roster contract with Texas in February.

The left-hander kept the Twins off balance with a high-80s fastball, slider and fading changeup. He became just the second pitcher in Rangers’ history with as many as eight strikeouts in a stint of 3 1/3 innings or fewer.

“Anytime you’re facing a guy you’re not familiar with, you’ve got to make an adjustment on it,” Baldelli said. “A guy with a little sneakiness to his fastball and a good changeup as well.”

Yang, 33, became the oldest pitcher in team history at the time of his first major league start. He became the fifth Texas pitcher with eight-plus strikeouts within his first three career games, with Bobby Witt being the last in 1986.

Rangers: Manager Chris Woodward said OF Khris Davis, who has been out all season with a left quad strain, could be activated during the upcoming weekend series at home against Seattle.

Twins: Rookie Alex Kirilloff was placed on the injured list before the game with a right wrist sprain. Kirilloff, who had hit safely in each of his last seven games, went to see a hand and wrist specialist on Wednesday. Manager Rocco Baldelli said Kirilloff will travel with the team to Detroit and then drive to Dayton, Ohio to get another opinion on the wrist from Dr. Thomas Graham. … Miguel Sanó was activated off the injured list. Sanó missed 12 games with a right hamstring strain.

Minnesota RHP Michael Pineda (2-1, 3.20 ERA) will start the final game of the four-game series on Thursday afternoon. Pineda had been pushed back from his scheduled Wednesday spot due to wrist soreness, but manager Rocco Baldelli said Pineda is ready to slot back into the rotation. Texas has RHP Jordan Lyles (1-2, 7.39) scheduled to start. Lyles has given up 12 earned runs over 6 2/3 innings in his last two starts.