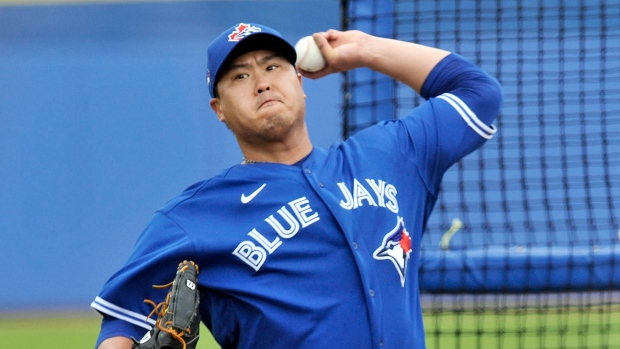 DUNEDIN, Fla. — A week into spring training, hitters are trying to find their timing while pitchers are working on dialling in their command.

Four days ahead of the Toronto Blue Jays’ Grapefruit League opener against the New York Yankees, live batting practice is a part of that.

But when you have a recent $80-million investment facing a dreadlocked hitter who was the top prospect in all of baseball a year ago at this time, eyes couldn’t help but turn towards the backfields at the Jays’ under-construction complex Wednesday afternoon.

No matter the time, the place, or the effort level, Vladimir Guerrero Jr. vs. Hyun-Jin Ryu is worth watching.

It was an uneventful five pitches – it started with a swing and miss through an off-speed pitch, followed by a couple foul balls, a take, and a foul tip off the body of catcher Danny Jansen – but Ryu seemed pleased.

Overall, he threw five pitches each to Guerrero, Teoscar Hernandez, Randal Grichuk, and veteran infielder Ruben Tejada, before asking pitching coach Pete Walker to throw an extra 10 off another mound adjacent to the field.

“I’m not really sure exactly what I’ve learned about this experience, but one thing that I’m very concerned about when I’m facing my teammates is making sure I don’t hit them,” Ryu said through interpreter Bryan Lee. “It’s hard to go in on them and that was something that I was thinking about again today.”

With a large contingent of Korean media following his every move, Ryu talks on almost a daily basis.

He also seems to enjoy it.

There are quirks to his routine, like Lee, the interpreter, and his trainer, Byung-Gon Kim, doing all the running and conditioning on the field alongside the star lefty.
“It’s interesting,” Walker laughed. “I’ll have to try to get in there with them. I’ve noticed that a few times.”

Even early on in camp, there’s a noticeable level of attention to detail with Ryu’s throwing program.

“He’s very conscious of his throws and the effort level on each throw, especially in the early going in his catch,” Walker said. “He works out to a certain length, it’s under total control, it’s very easy as he tries to loosen up his arm, and then he’ll step on it a little bit more. He kind of has a real good feel of this throwing routine and what works for him. I know he has his personal trainer and he’s got his crew, but that’s all good stuff. He’s obviously had a lot of success with them and they keep him in his normal routine.”

While the workload will slowly ramp up, Walker sees Ryu trying to hone things in early.

It’s evident when he doesn’t like the action on a pitch, even in late February.

“You can tell when he’s frustrated when a pitch isn’t where he wants it to be,” Walker said. “I think he’s competitive pitch to pitch and he wants to see a certain action on each pitch, whether it’s vertical or horizontal movement. If he doesn’t, he wants to perfect it. I think that’s his mindset and that’s really good, especially this early in camp. He wants to go out there with his best stuff right away.”

Hernandez got his first look at Ryu on Wednesday and liked what he saw.

“Obviously, he wasn’t throwing 100 per cent today,” said Hernandez, who’s been shifted to right field this season, the spot he says he’s most comfortable in the outfield. “I think he was just locating some pitches. I don’t think the pitches that he was throwing were moving the way I know they’re going to move when the season starts. For me, he looks pretty good.”

While Vladdy Jr. didn’t do any damage against Ryu, he was able to turn on an Anthony Kay offering for a line-drive home run to left-centre field.

The swing drew an audible reaction from Bo Bichette and Brandon Drury on the bench.

Every player has a different take on live BP.

“I think it’s more about starting to feel comfortable again with people throwing hard pitches at you,” Bichette said. “Some people handle it better than others. Personally, I’m not one of those, but every time I see Vladdy do live BP it’s homers.

“Sometimes it’s fun to go watch him because we all know he hits live BP well. I don’t think pitchers care if they get hit because they’re working on stuff, just like I don’t care if I swing and miss or a foul ball or whatever, I’m working on stuff.”

When it comes to Vladdy Jr., Blue Jays hitting coach Guillermo Martinez has been preaching hit tool over power tool.

“Hopefully can do it every single at-bat during the season,” Martinez said of the homer off of Kay. “He’s much better. I think a lot of last year, him pounding the balls into the ground, it was a lot to do with him being slightly out of shape and just trying to figure things out on his own. He’s in a better mindset now, better swing, better shape.”

During his rookie season, Guerrero’s ground-ball percentage sat at 49.6 per cent.

That number was the 17th highest among qualified hitters.

For context, Mike Trout hit 24.3 per cent grounders, the best in baseball.

In addition to talking to the soon-to-be 21-year-old about improving his pre-game preparation and finding a routine to stick with, keeping his bat flat through the zone is the mechanical adjustment being made.

The Jays are hoping a flatter swing promotes natural lift because they’re not trying to get him to sell out for power – exactly the opposite, in fact.

Given a choice between Vladdy hitting .310 with 25 homers or .275 with 39 bombs, Martinez will take the former.

“I’d rather him think the .310/25 because with that mentality he’s going to hit 40,” Martinez said. “If he goes out there and he searches for power, that’s where he’s going to get in trouble. I told him before; he’s a hitter that hits with power. He’s not just a power hitter. The more you think about power the more you search for it and the more you swing and miss and chase and just abandon your plan.”

Pannone’s velocity up in bullpen

Now that there is additional rotation depth on hand in the form of Ryu, Tanner Roark, who’s been sick to start camp, and Chase Anderson, some of the extra arms will be moving to the bullpen.

Thomas Pannone was the first, as the sample size of 13 starts and 116 innings over the past two seasons was enough for the Jays to decide on a role change.

In the early going, the results are positive.

The 25-year-old left-hander’s velocity has been up to 92-93 mph in shorter bursts, after sitting in the 87-90 range last year depending on the role and the day.

“He’s quicker to the plate and there’s not so much thought process and moving parts in his delivery, which is good for him,” Walker said. “I think he looks great physically, to be honest with you, and his arm strength is as good as I’ve seen it.

“He just wants to get the ball and attack and I think that’s the mindset we see right now. I see an uptick in velocity and his breaking ball is a little bit sharper, which is only going to help his off-speed pitch, as well.”

If the velocity holds into late March, Pannone has a great shot to win a bullpen job and break camp with the big club.

Even though the Jays have said they don’t necessarily need a lefty in the ’pen, his handedness will help if he’s pitching well.

The only other lefty relievers in camp are prospect Kirby Snead, veteran reclamation project Brian Moran and 26-year-old Travis Bergen, who posted a 5.49 ERA across 19.2 frames with the San Francisco Giants last season, before being returned to the Jays organization as a failed Rule 5 draft experiment.