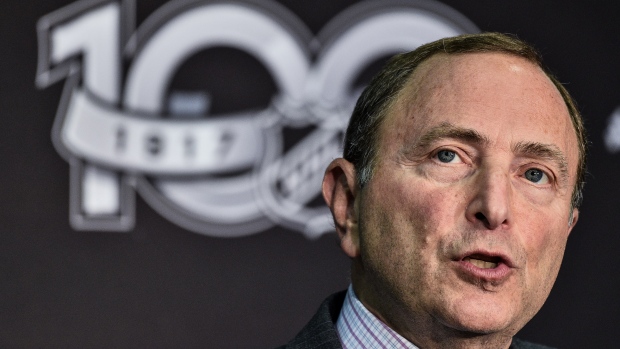 TORONTO — The NHL hopes to inch closer to a decision on the 2018 Olympics later this week.

League officials will meet with the International Ice Hockey Federation in New York on Wednesday. Deputy commissioner Bill Daly said the NHL hopes to learn if any traction has been made between the IIHF and the International Olympic Committee with regard to potential sticking points for participation at the Games in South Korea.

No decision with regard to the NHL's position is expected. But the league hopes to learn if the IOC has budged at all with respect to money issues currently clouding the process. The IOC is resisting covering out-of-pocket payments it took care of at the past five Olympics.

NHL commissioner Gary Bettman said those costs were upwards of US$10 million. That, as well as the complete shutdown of the NHL season for two-plus weeks, could be a bridge too far for the league.

"I can't imagine the NHL owners are willing to pay for the privilege of shutting down for 17 days," Bettman told attendees of the Prime Time Sports Management Conference in Toronto on Monday morning. "I just don't see that."

Daly said he had no reason to think that the IOC's position had changed. If that's the case, the NHL and NHL players' association will have to jointly determine whether to proceed with participation in a sixth consecutive Games.

Bettman said a decision would need to be made by early January at the latest. He couldn't foresee it drifting into the spring. The NHL needs to know whether its 2017-18 schedule will include an Olympic break. It's currently in the early stages of crafting that schedule.

The IOC has covered the out-of-pocket costs it's now resisting since the NHL began participating in the Games in 1998. Failure to do so again, Bettman hinted, could be a deal-breaker for the league's owners. Bettman also took aim at the restrictive policies of the IOC with regard to the Olympics.

Still pinning the odds of NHL participation at 50-50, IIHF president Rene Fasel dismissed concerns about money. He said finding the $10 million-plus needed to cover transportation and insurance wouldn't be a problem. Instead, he argued, the NHL and its owners had to decide whether they wanted to shut down in February, given the logistical hurdles.

NHL and NHLPA officials recently visited the Olympic site in Pyeongchang, believing it to be suitable for international competition. They saw that limited accommodations in the city could pose some issues.

The GM meetings on Tuesday, meanwhile, will include some discussion about the place of blindside hits in the NHL. The item boiled into a topic of some public intensity after Maple Leafs centre Nazem Kadri faced no supplementary discipline for a hit on Canucks winger Daniel Sedin.

Blindside hits are only illegal if the head is the principle point of contact.