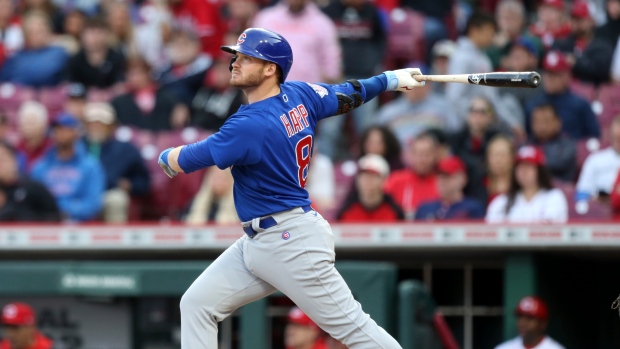 CINCINNATI (AP) — There's something about Cincinnati for Ian Happ.

The Cubs left fielder played college baseball at the University of Cincinnati, a few miles away from Great American Ball Park. And for reasons not entirely known to him, he really likes to hit there.

Happ added a three-run homer and an RBI double to his impressive body of work at GABP, powering the Cubs to a 7-4 win over the Reds on Monday night.

The Pittsburgh native now has 14 homers among 24 extra-base hits and 29 RBIs in 35 games at Great American.

“I don't have a good answer for it,” he said. “I do well here. I've always been really comfortable here. I have some people around that I know really well, so I've been lucky to have a lot of success here.”

He drove in Seiya Suzuki with a fourth-inning double before Patrick Wisdom hit a three-run homer, his team-leading 10th of the season.

Then, with Chicago holding a 4-3 lead with two outs in the seventh, Happ drove the first pitch he saw from reliever Luis Cessa into the right-field bleachers.

“He sees the ball well here,” Cubs manager David Ross said. “That first one got run down there at the track, and the double and homer were big shots.”

Drew Smyly (2-5) went 5 2/3 innings, allowing three runs and four hits while striking out five. He seemed to be on the way to one of his best outings of the season, retiring 13 at one point, but got in trouble in the sixth when Tommy Pham hit a solo homer and Aquino launched a two-run shot to center field.

Aquino, who had spent the last few weeks in the minors because of lack of production, hit another long drive in the eighth, hitting Chris Martin's slider 429 feet off the facing of the second deck in left field.

Aquino, who has struggled in recent years after a big rookie season, began the game with just one home run in 45 at-bats for the Reds in 2022.

David Robertson closed for his sixth save.

Reds starter Vladimir Gutierrez (0-6) continued to struggle. He lasted four innings, allowing four runs and four hits and striking out five. He pitched for the first time since May 11 as the Reds pondered moving him to the bullpen.

“Gutierrez was really good early, probably the best we’ve seen him all year," Reds manager David Bell said. "I think he had so much time off that it caught up to him.”

Happ might have had another home run if not for Reds center fielder Nick Senzel, who was back in the lineup for the first time after missing 17 games with COVID-19. Senzel made a leaping catch at the center-field wall to rob Happ of a home run in the second inning. The next batter, Yan Gomes, hit a liner that Senzel ran down in the left-center field gap, making the stab over his head. Senzel didn't fare as well at the plate, going 0 for 5 and fanning three times.

A fan was surprised to find that a high foul ball that drifted into the stands along the third-base line somehow ended up his beer cup — without knocking the cup over or spilling the contents. The guy got a hearty cheer from the crowd when he chugged the rest of the beer with his new souvenir still in the cup.

Cubs: Ross said C Willson Conteras, who left Saturday's game with tightness in his left hamstring, is getting better and probably will not have to go on the injury list.

Reds: RHP Connor Overton was placed on the 60-day injury list with back issues. ... LHP Mike Minor (shoulder) will make one more rehab start at Triple-A Louisville before making his Reds debut. ... LHP Nick Lododo (lower back) has started throwing again. ... The Reds still have 13 players on the injured list.

The Reds reinstated the following players from the COVID-19 restriction list following the road trip to Toronto: OF Albert Almora Jr., INF Brandon Drury and RHPs Joel Kuhnel and Tyler Mahle. .... Right-hander Graham Ashcraft, INF Taylor Motter and were sent back to Louisville after being brought up as substitute players for the Blue Jays series.