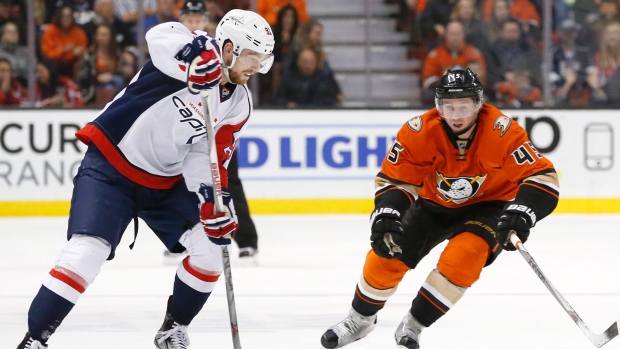 The trade of forward Marcus Johansson to the New Jersey Devils opened up a spot on the Capitals' power play. Evgeny Kuznetsov may fill it according to Isabelle Khurshudyan of the Washington Post.

"Caps' legit top PP is practicing. Looks like Kuznetsov is indeed getting Johansson's old spot with that group," she tweeted Tuesday morning.

No. 10 overall pick Owen Tippett will take the ice at the BB&T Center in Florida for the first time Monday night as the Panthers host the Tampa Bay Lightning.

Tippett played on the road last week as the Panthers visited the Nashville Predators, picking up an assist in just shy of 15 minutes of ice time.

Tippett survived the Panthers' latest round of cuts Monday when the Panthers trimmed their roster to 32 players.

The Leafs hit the ice Tuesday morning following their 5-1 victory over the Montreal Canadiens the night before. Up-and-comer Miro Aaltonen was on the top line at practice with Connor Brown and Matt Martin. Here are the rest of the lines from the first practice of their morning skate:

The lines in the second practice were:

Tuesday marks a special day for the Golden Knights as they will play their first game ever at T-Mobile Arena. Canadian goaltender Calvin Pickard will start in net. Vadim Shipachyov, Reilly Smith and Jonathan Marchessault will start as their top unit.

The Golden Knights will host the Los Angeles Kings.

The Senators have placed forward Tyler Randall on waivers for the purpose of being assigned to Belleville. Chris VandeVelde has also been released from his PTO.

Monday night, the Flyers went with Michal Neuvirth in net and Tuesday they will turn to off-season acquisition Brian Elliott according to the Philadelphia Inquirer.

Here are the Blue Jackets' lines as they take on the St. Louis Blues at home:

The Wild have signed defenceman Brennan Menell to an entry-level contract, reports Michael Russo of The Athletic Minnesota. He will be assigned to Iowa.

#mnwild have signed Menell to entry-level contract. Quite the story as you can read. He'll be assigned to Iowa to try to make their team https://t.co/o4YFIL4HXS

Russo notes that if Menell is able to earn a top six role in Iowa, he'll turn pro. If he can't, he'll be returned to Lethbridge for an overage year.