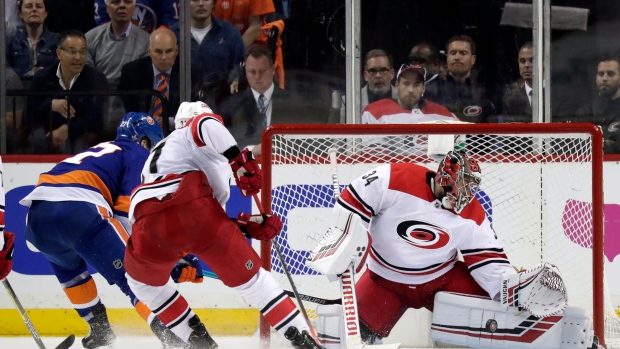 After falling 5-4 to the Blackhawks in Chicago Sunday night, the Toronto Maple Leafs waived backup goaltender Michael Hutchinson on Monday. The 29-year-old has been held without a win so far this season, posting an 0-4-1 record and .879 save percentage.

Doesn't deserve all the blame for Toronto's performances (and winless record) on second half of back-to-backs, but something has to give there.

Torey Krug will miss Tuesday's match-up with the Florida Panthers, according to head coach Bruce Cassidy.

The Bruins have recalled Urho Vaakanainen from the AHL's Providence Bruins. The 20-year-old has posted two assists in 15 games so far this season.

Correction: Urho Vaakanainen is up from Providence on a regular recall. https://t.co/RCTDkPSXcN

The defending Stanley Cup Champions announced on Monday that both Troy Brouwer and Jamie McGinn would be joining the team on professional tryouts in lieu of injuries to Vladimir Tarasenko and Alexander Steen. Either player will practice with the team for 10 days before a decision on their future is made.

Troy Brouwer and Jamie McGinn will join the Blues this week on professional tryouts. https://t.co/LtFJMp2Chz #stlblues

The Bolts have reassigned forward Alex Volkov to the AHL's Syracuse Crunch.

There is no update on Sidney Crosby's health but he is continuing to be evaluated, according to head coach Mike Sullivan.

Coach Sullivan: “Sid is continuing to be evaluated right now. I don’t have an update for you. He will not play against the Rangers tomorrow. When I get further information, I will let you know.”

Reports project that Petr Mrazek will start in goal for the Hurricanes on Monday night at home versus the Ottawa Senators.

The Panthers have loaned forward Dominic Toninato to the AHL's Springfield Thunderbirds.

The Buffalo Sabres assigned defenceman Lawrence Pilut to the AHL's Rochester Americans. Pilut joined the Sabres as depth security on their trip to Stockholm, Sweden, for two 2019 NHL Global Series games, but did not dress in either contest. He has a goal and five assists in eight games with the Amerks this season.

We have assigned Lawrence Pilut to @AmerksHockey.

Defenceman Gavin Bayreuther has been reassigned to the AHL's Texas Stars.

NEWS: Defenseman Gavin Bayreuther has been reassigned to the @TexasStars.#GoStars https://t.co/U83rYQslpD

Forward Travis Boyd and Defenceman Tyler Lewington have been reassigned to the AHL's Hershey Bears.

Captain Nick Foligno was handed a three-game league suspension for his hit on Pierre-Edouard Bellemare during Saturday's game against the Vegas Golden Knights.

The #CBJ captain receives a three-game suspension from the NHL.https://t.co/xv49DpE5TL

The Golden Knights assigned three players to the AHL's Chicago Wolves. Cody Glass, Nicolas Roy and Nicolas Hague were each were sent down.

The following players have been assigned to the @Chicago_Wolves:

The Blackhawks have signed recently acquired defenceman Alec Regula of the OHL's London Knights to a three-year deal worth $897,500 AAV. Regula was traded from Detroit to Chicago in exchange for forward Brendan Perlini on Oct. 28.

Head coach Jared Bednar says Pierre-Edouard Bellemare has been diagnosed with a concussion and is going into protocol.

Coach Bednar on Bellemare: “He was diagnosed with a concussion, going into protocol. He’s feeling better today, so that’s positive.”

Philipp Grubauer is nearing a return to action after suffering a lower-body injury against the Nashville Predators on Nov. 5. Mikko Rantanen has also been skating by himself.

Coach Bednar on Grubauer: “I don’t see him being ready for Winnipeg... but he’ll be on the trip.”

Other updates: “Mikko skated on his own, he’s getting stronger. No timetable on him, Landy or Wilson.”#GoAvsGo pic.twitter.com/sFkMbbTgRI

Trevor Lewis has been placed on injured reserve due to a lower-body injury.

The LA Kings have placed forward Trevor Lewis on injured reserve with a lower-body injury.https://t.co/wNhQlRnWaH

The Ducks announced that Brendan Guhle has been recalled from the AHL's San Diego Gulls. Additionally, Simon Benoit has been sent down.