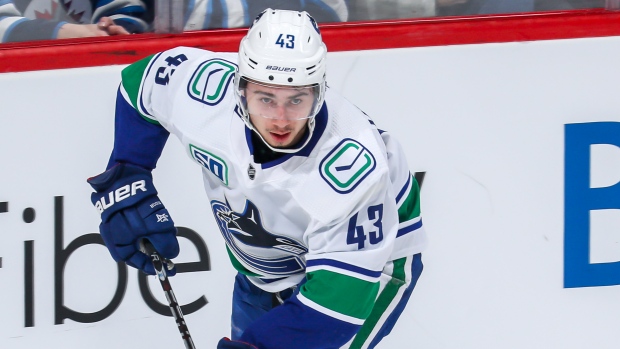 Defenceman Quinn Hughes is "close" to playing against the Chicago Blackhawks as he deals with a lower-body injury, head coach Travis Green said.

Green, however, did not commit to Hughes playing, noting he was also close to playing in Tuesday's game against the Sabres, which he missed.

Hughes, who has one goal and one assist in three games this season, did part in the Canucks optional skate Thursday.

Michael Hutchinson will make his first start of the season against the San Jose Sharks on Friday.

Jack Campbell will start in the second half of the team's back-to-back against the Pittsburgh Penguins on Saturday.

Forward Brady Tkachuk will make his season debut for the Sens Thursday night against the visiting San Jose Sharks after signing a new seven-year, $57.5 million contract. The 22-year-old scored 17 goals and added 19 assists over 56 games last season, his third campaign in the nation's capital.

Head coach Dominique Ducharme confirmed that forward Jake Evans, who missed Tuesday's game against the Sharks with an upper-body injury, will return to the lineup Thursday night against the Carolina Hurricanes

Forward Ondrej Kase returned to practice on Thursday after taking a blocked shot to the foot in Monday's loss to the New York Rangers.

Ondrej Kase has reported for duty at #Leafs practice, so the results of those tests after he blocked a shot off his foot must have been positive

Forward Mark Scheifele produced another positive COVID-19 test on Thursday and remains in the protocols. As a result, he will not be in the lineup against the Anaheim Ducks.

Mark Scheifele produced another positive COVID-19 test today. He remains in Covid protocol and is out of the #NHLJets lineup.

Goaltender Mikko Koskinen will get the start for the Oilers against the Arizona Coyotes after Mike Smith was placed on injured reserve.

Mikko chats with the media. He'll get the start tonight in Arizona. #LetsGoOilers pic.twitter.com/VTYYptQX2S

#Flames Roster Update: Brad Richardson has been activated from the IR and Glenn Gawdin has been assigned to the @AHLHeat.

Forward Sidney Crosby will not play Saturday vs. the Maple Leafs, the team announced on Thursday.

Sidney Crosby will not play on Saturday vs. Toronto.

Goaltender Kevin Lankinen will be in net for the Blackhawks tonight against the Vancouver Canucks. Forwards Dylan Strome and Ryan Carpenter will draw into the lineup in place of Philipp Kurashev and Mike Hardman.

Kevin Lankinen starts tonight for the #Blackhawks against Vancouver.

Dylan Strome and Ryan Carpenter will draw into the lineup in place of Philipp Kurashev and Mike Hardman (head laceration).

Rangers' forward Kaapo Kakko (upper body) is on the ice for Thursday morning's optional pregame skate. Kakko was placed on injured reserve after sustaining an injury on Saturday night against the Canadiens.

UPDATE: Kaapo Kakko (upper body, IR) is on the ice for this morning's optional pregame skate.

Sabres' head coach Don Granato says that forward Cody Eakin will miss the next couple of games after crashing feet first into the net during Thursday's practice.

Coach Don Granato confirmed today that Cody Eakin will miss the next couple of games. John Hayden will draw in for his first action as a Sabre. @Duffersabres has that, and more. ⬇️#LetsGoBuffalo pic.twitter.com/3hea7v1nqe