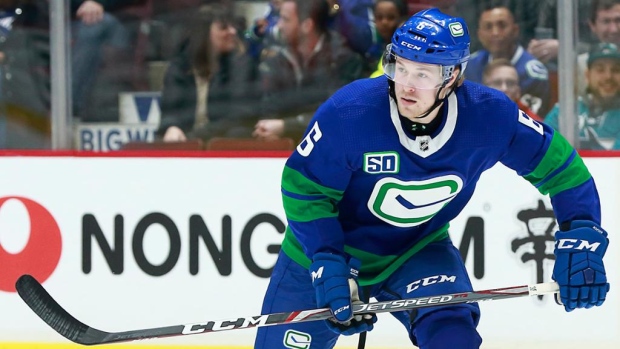 Coach Tipp confirms Schmiddy will get the start tomorrow vs. Calgary. #LetsGoOilers pic.twitter.com/RJUqRQwggR

Below are the Oilers lines during Friday's practice:

Goaltender Jonathan Bernier will likely be in net for the Devils' season opener against the Chicago Blackhawks.

#NJDevils Jonathan Bernier in the starters net. Likely the indication you need that he’s starting in the season opener against the Hawks. pic.twitter.com/npdqB2EHSv

Defenceman Ty Smith was also on the ice for the Devils' morning skate after missing the entire preseason due to injury.

Ty Smith is on the ice for #NJDevils morning skate.

He won’t play, but that’s a major positive.

Per Coach Q, it’ll be Sergei Bobrovsky in net tomorrow vs. the Islanders.

The Flyers have loaned forward Jackson Cates to the Lehigh Valley Phantoms of the AHL.

Transaction: We have loaned forward Jackson Cates to the @LVPhantoms (AHL).

• Chase Priskie and Maxim Mamin have been loaned to @checkershockey.

Defenceman Mattias Samuelsson (lower body) skated for a third time and could join Sabres practice within the next week.

Defenseman Mattias Samuelsson (lower body) skated for the 3rd time this morning. He could join practice within the next week.

The Sabres are on the ice for practice. Casey Mittelstadt (upper body) & Henri Jokiharju are not skating.

The Blue Jackets have assigned forward Yegor Chinakhov to the Cleveland Monsters of the AHL.