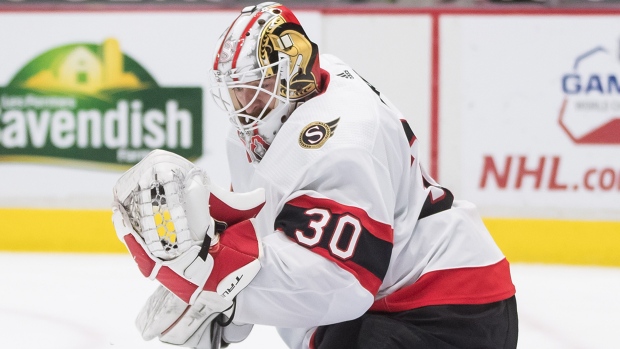 The Ottawa Senators announced Tuesday afternoon that goaltender Matt Murray will miss tonight's game against the Buffalo Sabres will a non-Covid illness.

Matt Murray will miss tonight's game with a non-covid illness.

The team also said that netminder Filip Gustavsson has been recalled from Belleville.

The team has also recalled forwards Mark Kastelic and Logan Shaw from @BellevilleSens. Both players have subsequently been re-assigned to the taxi squad.

Forwards Mark Kastelic and Logan Shaw were also recalled from the AHL and placed on the taxi squad.

The Senators are set to play their first home game since a 4-0 win over the Tampa Bay Lightning on Dec. 11.

The Capitals will be without T.J. Oshie, John Carlson and Conor Sheary against the Winnipeg Jets Tuesday night.

Oshie is out with an upper body injury while Carlson and Sheary are in the NHL's COVID-19 protocol.

The Canadiens announced that the team was adding two more players to the NHL's COVID-19 protocols.

Joel Armia and Cole Caufield tested positive and were both placed in the league's protocol.

Anton Khudobin has been reassigned to the taxi squad by the Stars. Khudobin last played in the Stars Jan. 15 loss to the Tampa Bay Lightning.

The team also announced that forward Ty Dellandrea has been recalled from the Texas Stars of the AHL and placed on the taxi squad.

The Devils will be without head coach Lindy Ruff due to personal reasons, he is expected to be back with the team Wednesday.

Lindy Ruff (personal) will not be on the ice for #NJDevils practice today.

He is expected to return to the club tomorrow.

The Hurricanes announced Tuesday that the team had reassigned Josh Leivo to the taxi squad and that Joey Keane had been assigned to the Chicago Wolves of the AHL.

The #Canes have reassigned forward Josh Leivo to their Taxi Squad and defenseman Joey Keane to the @Chicago_Wolves.https://t.co/gqV9qwwHc3

Bo Horvat won't be on the ice for the Canucks in Tuesday's matchup against the Nashville Predators.

The Vancouver Canucks announced today that forward Bo Horvat has been placed into the NHL’s COVID-19 protocol.

The Canucks announced that Horvat was bein places in the NHL's COVID-19 protocol.

The Maple Leafs will be without a key member of the squad after Jake Muzzin was diagnosed without a concussion.

Jake Muzzin diagnosed with concussion after taking a big hit in St. Louis

Will not travel to New York today

The defenceman took a big hit against St. Louis and the team announced Tuesday that he won't travel to New York.

Max Willman has been called up from the taxi squad by the Flyers. The team also announced they were loaning Jackson Cates to the Lehigh Valley Phantoms of the AHL.

Transaction: We have added forward Max Willman to the active roster from the club's Taxi Squad, and have loaned forward Jackson Cates to the @LVPhantoms (AHL), from the Taxi Squad. pic.twitter.com/R2WbBiitSy

The Sabres announced the team had recalled Brett Murray from the taxi squad.

We have recalled forward Brett Murray from the Taxi Squad.

The Rangers have assigned Johnny Brodzinski and Tim Gettinger have been assigned to the Hartford Wolf Pack of the AHL.

UPDATE: Jonny Brodzinski and Tim Gettinger have been assigned to @WolfPackAHL.

Coach Bruce Cassidy announced that Matt Grzelcyk is out of protocol and expects that he will suit up for the Bruins Tuesday against the Carolina Hurricanes.

Matt Grzelcyk is out of COVID-19 protocol. Bruce Cassidy expects he will play tonight.