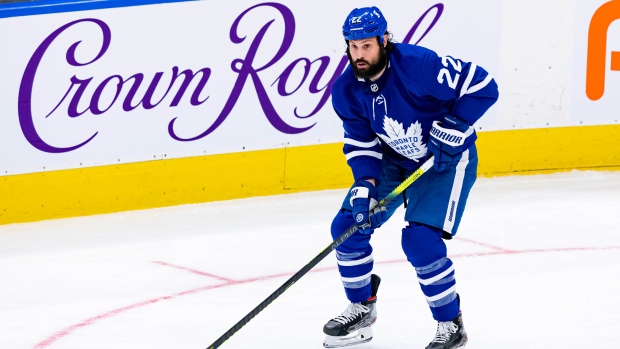 Veteran defenceman Zach Bogosian was not wearing a red no-contact jersey at Monday's practice meaning there's a good chance he'll be ready at some point during Toronto's opening round playoff series against the Montreal Canadiens.

The 30-year-old, who has been out since April 20 with a shoulder injury, tallied four assists over 45 games this season.

Bogosian has been medically cleared. Leafs blueline is in good shape health wise.

Fellow defenceman Ben Hutton, who missed Monday's practice, has a non-COVID related medical situation that the team is monitoring.

Sheldon Keefe says Zach Bogosian took a 'positive step' which is why he was in a regular sweater at practice ... still not cleared to play, but expected back during the Habs series

Furthermore, forward Zach Hyman, who missed the last 11 games of the regular season with a sprained right MCL, skated on the top line with Auston Matthews and Mitchell Marner on Monday for the second straight day.

"We haven't gotten the final clearance for him medically, but I certainly believe we are trending that way," said coach Sheldon Keefe on Sunday. "Another great practice for him today."

The 28-year-old winger scored 15 goals and added 18 assists over 43 games with the Maple Leafs this season.

Defenceman Mac Hollowell and forward Scott Sabourin were loaned to the Toronto Marlies as well on Monday.

Goaltender Vitek Vanecek was not on the ice for the morning skate after being pulled in Game 1 with an apparent lower-body injury.

Craig Anderson was the first goalie off the ice Monday and appears set to make his first playoff start since 2017 when he was with the Ottawa Senators.

Anderson turned aside 21 of 22 shots after entering Game 1 in relief of Vanecek as the Capitals won in overtime.

Craig Anderson the first goalie off the ice at the end of the Capitals morning skate.

Looks to be tonight's starter.

Removed from the COVID Protocol on Sunday, Evgeny Kuznetsov was skating as an extra Monday morning.

Forward Viktor Arvidsson will return to the lineup for Game 1 against the Hurricanes on Monday. The 28-year-old has been sidelined since April 27 with an upper-body injury. Arvidsson has 10 goals and 15 assists over 50 games this season.

Viktor Arvidsson, who has been out since April 27, will return tonight, John Hynes said.

Alex Nedeljkovic was in the starter's net for Carolina's morning skate and will likely get the nod between the pipes for Game 1 against the Nashville Predators. The 25-year-old is 15-5-3 with a 1.90 goals-against average and a .932 save percentage over 23 games for the Hurricanes this season.

Nedeljkovic in the starter's crease at the skate