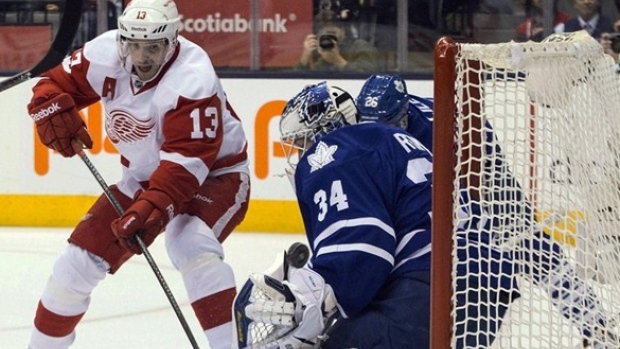 Head coach Mike Babcock said that Pavel Datsyuk has a lower-body injury and will miss the next two games. Babcock wasn't sure if he might return Sunday. - Ansar Khan, MLive

Peter Holland is expected to miss next two games. Either Sam Carrick or Greg McKegg will be called up, with Peter Horachek saying he's leaning toward Carrick. - Mark Masters, TSN

Oilers winger Matt Fraser is undergoing the NHL’s concussion protocol after being levelled Monday by a Nazem Kadri elbow. Fraser had to be helped off the ice after the Toronto Maple Leafs centre delivered a third-period head shot that earned him a hearing with the NHL’s department of player safety. “He was concussed,” said Oilers coach Todd Nelson. “We’re going to follow the protocol and re-evaluate him Wednesday, but we can say he’s doing well.” – Edmonton Sun

Barret Jackman was a healthy scratch for the Blues, missing his first game of the season. Only Alex Pietrangelo and Vladimir Tarasenko have played in all 70 games. – Associated Press