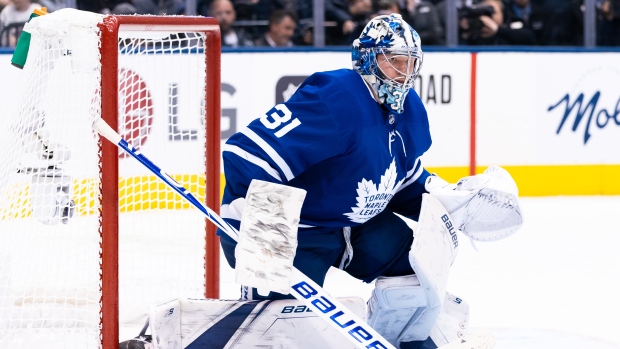 According to TSN's Kristen Shilton, Michael Hutchinson was the only goalie seen skating at Wednesday morning's skate, suggesting Frederik Andersen could get his second start in two nights.

Michael Hutchinson skating this morning for #Leafs. Frederik Andersen is not.

That would suggest that, perhaps, Andersen is going to start tonight vs. Avs after last night's debacle in Philly. Stayed tuned for Sheldon Keefe's update around 4:45 p.m.

Toronto has also activated forward Mason Marchment from IR and assigned him to the AHL's Toronto Marlies.

#Leafs have loaned Martin Marincin and Nic Petan to the Marlies.

Mason Marchment has been activated off IR as well, he too as been loaned to the Marlies.

The team called up forward Colby Cave from the AHL's Bakersfield Condors on Wednesday.

The #Oilers have recalled forward Colby Cave from the @Condors. pic.twitter.com/vb4jRuqnev

Following Tuesday's 4-2 victory over the New York Islanders, Montreal has assigned defenceman Gustav Olofsson to the AHL's Laval Rocket. The 25-year old, who was first recalled on Nov. 29, played three games with the Canadiens, registering zero points and a minus four rating.

The Canadiens announced that defenseman Gustav Olofsson has been assigned to the AHL’s Laval Rocket.#GoHabsGo

Flames forward Austin Czarnik has been assigned to the AHL's Stockton Heat on a conditioning stint.

Czarnik was placed on the long-term injured reserve in late October due to a lower-body injury. In eight games prior to the injury, the 26-year old recorded three points in eight games.

In a move corresponding to adding forward Nick Shore off wiavers, the Jets have assigned forward Michael Spacek to the AHL's Manitoba Moose. Spacek was recalled on Nov. 13 but has yet to dress for a game in Winnipeg. The 22-year old has recorded three goals and seven assists in 14 games with the Moose.

TRANSACTION: The Winnipeg Jets have reassigned F - Michael Spacek to the Manitoba Moose.

Mikko Koskinen will be the starting goaltender for the Oilers' Wednesday night tilt against the Ottawa Senators.

Defenceman Joel Persson, who was recalled from the Bakersfield Condors on Tuesday, will play Wednesday against the Senators on a pairing with Kris Russell. Persson, 25, has played 10 games with the Oilers this season, recording two assists.

Oilers 9-2 against the East.

Senators 2-7-1 vs West this year but have won five straight games in Edmonton.

Canucks' prospect Olli Juolevi (hip) has been cleared to play after being removed from the active roster of Vancouver's AHL affiliate, Utica Comets. The fifth-overall pick in the 2016 draft has recorded five assists in 14 games with the Comets this season.

Good news about Olli Juolevi, who will be returning to the ice. pic.twitter.com/y9SktEIgo6

Blackhawks defenceman Olli Maatta was held out of Wednesday's practice due to flu-like symptoms.

The Flyers have recalled forward Mikhail Vorobyev from the Leigh Valley Phantoms of the AHL, In six games with Philadelphia this season, the fourth-round pick has recorded one assist.  The 22-year old has five goals and nine assists in 19 games with the Phantoms this season.

Roster move: We have recalled Mikhail Vorobyev from the @LVPhantoms (AHL) and placed Michael Raffl on Long-Term Injury status. pic.twitter.com/46DLSWimig

Michael Raffl is set to miss four weeks with a broken finger, prompting Vorobyev's call up.

Injury update: Michael Raffl suffered a broken finger tonight and is expected to be out approximately 4 weeks.

The Bruins took to the ice on Wednesday morning with the following practice lines:

Avalanche head coach Jared Bednar has confirmed that winger Matt Calvert will return to the lineup on Wednesday against the Maple Leafs.

Coach Bednar confirms: Matt Calvert is back in the lineup tonight!!#GoAvsGo pic.twitter.com/NGVMN8PN7k

Calvert has not played since Nov. 16 due to an upper-body injury. The 29-year old has scored four goals and added eight assists in 20 games with Colorado this season.

The Sabres have assigned forward Jean-Sebastien Dea to the AHL's Rochester Americans. Dea played just one game in in Buffalo this season, failing to record a point. The 25-year old is second on the American's this season, with seven goals in 18 games.

We have have assigned forward Jean-Sebastien Dea to @AmerksHockey.

The Blue Jackets skated with the following forward lines at Wednesday morning's practice:

Defenceman Carl Gunnarsson (illness) is expected to return to the Blues' lineup on Wednesday night. Gunnarsson, who skated on a pairing with Alex Pietrangelo, has recorded one goal and three assists in 15 games this season.

Only one lineup change is expected tonight. https://t.co/9w07N8Ge0X #stlblues

In a related move, forward Antti Suomela has been placed on Injured Reserve.https://t.co/DfvFJa4uKg

Bergmann, 21, has recorded five goals and 11 points in 15 games with the Barracuda this season.

Defenceman Jarred Spurgeon (upper body) is expected to miss two weeks after suffering an injury in Tuesday's 4-2 victory over the Florida Panthers. Captain Mikko Koivu (lower body) was also hurt in the victory. He is listed as day-to-day.

Captain Mikko Koivu is day-to-day with a lower body injury.

Forward Justin Abdelkader, who has missed 11 games with an upper-body injury, participated in a full practice Wednesday for the first time since blocking a shot on Nov. 10. Head coach Jeff Blashill hopes to have Abdelkader back for Saturday's game against the Pittsburgh Penguins.

"I'm hoping he can have a day off tomorrow and have a real good practice Friday and potentially be ready for Saturday."https://t.co/gWqnBEakUt