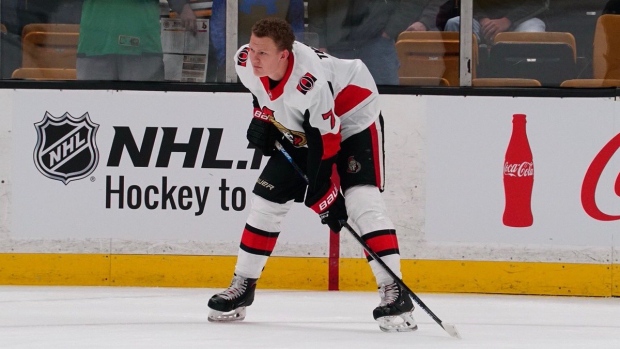 Senators rookie Brady Tkachuk skated with his team on Friday, wearing a non-contact jersey. The 19-year-old has missed the last six games with a torn ligament in his leg, but could return to action sometime next week, head coach Guy Boucher announced.

Guy Boucher says Brady Tkachuk is progressing well and he is hoping that maybe the rookie can return some time next week.

Connor Hellebuyck will get the nod for the second straight game in Finland for the Jets on Friday.

The 25-year-old stopped 36 of 38 shots in Thursday's 4-2 win over the Florida Panthers in Helsinki.

In other lineup news, Nic Petan will draw into the lineup in place of Jack Roslovic and Joe Morrow will replace Dmitry Kulikov on the blueline, Paul Maurice confirmed Friday.

Head coach Bob Boughner confirmed Roberto Luongo will start against the Jets on Friday in the second game of their Global Series in the Finland. Luongo has been out since Oct. 6 with a knee injury.

Bruins coach Bruce Cassidy said Thursday he's leaning giving Jaroslav Halak a second straight start on Saturday when the the Bruins take on the Nashville Predators after four days off.

"I think Halak has been better than Tuukka, so he's got a few more starts than we originally scripted," Cassidy said, per Joe Haggerty of NBC Boston.

Halak and Tuukka Rask have both started six games this season, though Halak owns a clear edge in the statistics.

Halak, who carries a $2.75 million cap hit on the two-year deal he signed as a free agent in July, has a 4-0-2 record while Rask's record sits at 3-3. Halak owns a 1.51 goals-against average and a career-best .947 save percentage to Rask's 3.15 GAA and .902 save percentage. The 33-year-old Halak also has two shutouts this season while Rask has none.

The two have rotated starts over the team's past four games, but it was Halak who started last - on Tuesday against the Carolina Hurricanes. Rask has not started back-to-back since allowing four goals in a loss to the Calgary Flames on Oct. 17. Halak then made two straight starts before Cassidy started rotating the two.

Aho, who has recorded at least one helper in each contest, can set the NHL record for longest season-opening assist streak, a mark set by:

Most Career Points Outside North America

WPG has won 4 of their past 5GP vs FLA