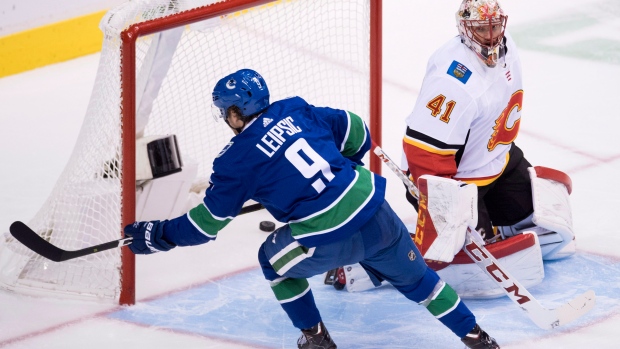 The team has claimed forward Brendan Leipsic off of waivers from the Vancouver Canucks.

Leipsic, 24, has two goals and five points through 17 games this season.

Pens' goaltender Matt Murray (lower-body injury) was back on the ice on Monday ahead of practice.

Matt Murray is back on the ice: pic.twitter.com/Mks5tqis97

Murray, 24, last played on Nov. 17 when he was pulled after allowing three goals on 10 shots.

The netminder has struggled all season long and has a 4-5-1 record with a 4.08 goals-against average and a .877 save percentage.

Sens' forward Colin White (personal) will be away from the team on Monday but is expected to be in the lineup for Tuesday's game against Montreal.

White, 21, has seven goals and 16 points through 26 games this season.

Bruins' defenceman Charlie McAvoy (concussion) remained on the ice for the full team practice on Monday.

Charlie McAvoy remains out on the ice for the full team practice. He is not wearing maroon or pinot noir or burgundy or merlot or bordeaux or...

McAvoy, 21, last played on Oct. 18 and has a goal and six points through seven games this season.

Flyers goaltender Brian Elliott (lower-body injury) took part in a couple of drills at practice on Monday before leaving the ice.

The rearguard currently plays for the Saginaw Spirit (OHL) and has five goals and 22 points through 21 games so far this season.

Devils' forward Jesper Bratt (illness) was absent from Monday's practice and will be a game-time decision.

Jesper Bratt is sick this morning. Not on the ice for #NJDevils⁠ ⁠ at morning skate.

Bratt, 20, has recorded two goals and nine points in 12 games this season.

Blue Jackets' defenceman Ryan Murray (bruised foot) was on the ice to start practice on Monday after leaving the game this past Saturday.

The Preds have assigned forward Anthony Richard to the Milwaukee Admirals (AHL).

Richard, 21, only played one game for the Preds and was held pointless.

Edmonton shut out Dallas en route to a 1-0 OT win in their only meeting this season.

The Lightning are 2-0-0 against the Devils this season.

Bolts' forward Nikita Kucherov is on a nine-game point streak recording four goals and 20 points during that span.

Devils' forward Taylor Hall has eight points in his last six games and is one goal shy of 200 for his career.

The Sabres have won their last three games in Nashville.