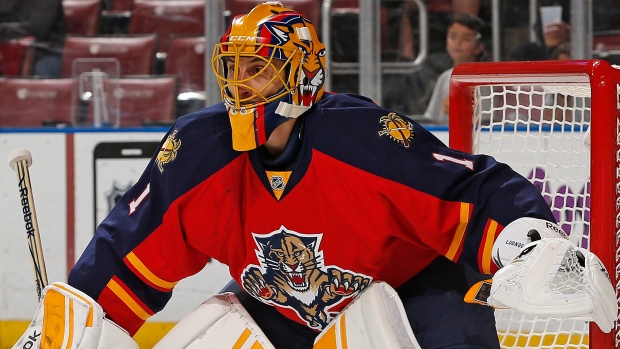 Goalie Roberto Luongo will start tonight for the Panthers against the Detroit Red Wings after missing six games to injury. - Miami Herald

Dustin Byfuglien will not play Thursday against the St. Louis Blues. It will be the sixth straight game he's missed. - TSN

Jonathan Bernier starts in goal as the Leafs look to end a three-game slide. Toronto has lost nine of their past 10 meetings with the Sharks, including a Jan. 15 meeting in San Jose.

Tim Erixon will replace T.J. Brennan on the Leaf defence. Erixon has played in only four games thus far as a Leaf.

Pavel Datsyuk won't travel to Florida, idled with the ubiquitous "lower-body ache." But Darren Helm should return against the Panthers tonight after missing seven games with a strained oblique. – Detroit Free Press

Canucks reassign Frank Corrado to the Comets of the AHL. - Team Release

All signs point to defenseman Michael Del Zotto returning to the lineup Thursday after missing six games because he "tweaked something." The Flyers called it an upper-body injury. – Philadelphia Inquirer/Daily News

Avalanche defenseman Erik Johnson is not traveling with the team and will miss consecutive-night, two city games beginning Thursday at the Arizona Coyotes. Colorado's only selected NHL all-star has missed the past 21 games after undergoing arthroscopic knee surgery in the days leading into January's all-star break. But Johnson is close to coming off the injured reserve, and could be poised to play in the final 11 games starting Monday at Calgary. – Denver Post

John Klingberg looks good to go Thursday. He has missed three games with an upper body injury, but the Stars sent Jamie Oleksiak back to the AHL, so they have only six defesemen right now. That means Klingberg is ready to return. – Dallas Morning News