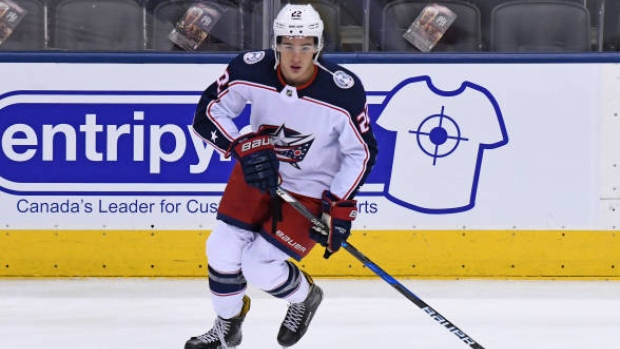 The Columbus Blue Jackets announced on Wednesday that forward Sonny Milano has been placed on injured reserve due to a torn oblique muscle and will miss four to six weeks. Milano suffered the injury on Jan. 8 against the Toronto Maple Leafs and hasn't played in the Blue Jackets' last two games.

Milano had eight goals and five assists in 35 games played this season with the Blue Jackets. In a corresponding move, the club has recalled forward Tyler Motte from the AHL's Cleveland Monsters.

Ken Warren reports that forward Bobby Ryan could miss "signficant time" due to another hand injury. Head coach Guy Boucher was "non-committal" regarding Ryan's situation before the team's bye week after Ryan left during an 8-2 loss to the Chicago Blackhawks on Jan. 9 due to an apparent hand injury. Ryan, who has scored five goals and 12 assists in 31 games, has missed action because of hand injuries on three separate ocassions this season and did not play on Jan. 10 against the Toronto Maple Leafs.

In more positive news on the injury front, barring a setback, Mark Borowiecki should be back in the lineup on Thursday against the St. Louis Blues after suffering a concussion against the New York Rangers on Nov. 19. - Ottawa Citizen

Head coach Claude Julien confirmed that newly claimed forward Logan Shaw will not play tonight against the Boston Bruins. Shaw is suffering from a lower-body injury and Julien also said that the 26-year-old needs some time to practice with his new teammates before getting into the lineup.

According to TSN's Kristen Shilton, forward Nikita Soshnikov wasn't on the ice at practice this morning for the Leafs. This indicates he could be on his way to the AHL's Toronto Marlies for a conditioning stint before returning to the Leafs' lineup, as expected. The 24-year-old Russian suffered a lower-body injury in early December, and has been on injured reserve since.

Nikita Soshnikov joined the #Leafs for morning skate yesterday but he is not on the ice at practice today. Everyone else who's healthy is accounted for.

Soshnikov could be heading for a conditioning stint shortly.

Beaulieu is out day to day with illness.

According to the Boston Globe's Fluto Shinzawa, Adam McQuaid is likely to be in the lineup on the blueline tonight against the Montreal Canadiens as Kevan Miller battles an illness. McQuaid hasn't played since Oct. 19 due to a broken fibula. Noel Acciari (upper-body) is expected to be back in the lineup against the Canadiens.

Adam McQuaid is likely to be in. Kevan Miller is still sick.

Golden Knights forward Tomas Nosek (upper-body) has returned to Vegas to be evaluated by team doctors, according to Steve Carp of the Las Vegas Review Journal. He left Tuesday's game against the Nashville Predators after taking a hard hit from defenceman Alexi Emelin.

In 41 games so far this season, Nosek has eight points.

According to the Rangers, Marc Staal (hip flexor) and Kevin Hayes both didn't take the ice for practice. Staal suffered the injury in Tuesday night's game against the Philadelphia Flyers and Hayes has not played since suffering a leg contusion against the Vegas Golden Knights on Jan. 7.

The Penguins announced they have recalled Jean-Sebastien Dea from the AHL's Wilkes-Barre/Scranton Penguins. Dea has nine goals and 23 points in 36 games with Wilkes-Barre.

According to the Tampa Bay Times Joe Smith, Lightning defenceman Dan Girardi (neck) is on the ice for the morning skate and is expected to return Thursday against the Golden Knights.

Dan Girardi on ice for #TBLightning practice. He said he expected to be back after bye after missing two games.