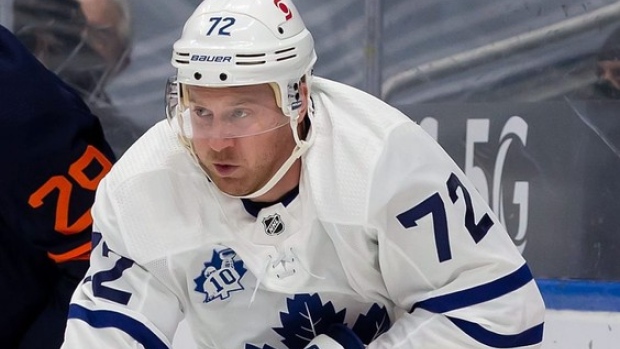 Head coach Sheldon Keefe told reporters that Travis Boyd will draw in for Nic Petan Saturday as they take on the Vancouver Canucks.

Frederik Andersen will start in net.

Keefe also said injured netminder Jack Campbell tried to skate again on Saturday but won't be backing up Andersen against Vancouver. That will be Michael Hutchinson instead.

Jack Campbell tried again to skate today, but won't be backing up; that'll be Michael Hutchinson

Head coach Dominique Ducharme told reporters that forward Josh Anderson is a game-time decision for Saturday's matchup with the Winnipeg Jets after missing the last three games with a lower-body injury.

He took part in the morning skate alongside Tyler Toffoli and Jesperi Kotkaniemi Saturday morning.

Meanwhile, Carey Price was in the starter's net at practice. Paul Byron and Victor Mete will serve as scratches.

Here were their lines courtesy of TSN's John Lu:

Per TSN's Sara Orlesky, the Jets are going with the same lineup as Thursday night when the Jets beat the Habs 4-3 in overtime.

Head coach Dave Tippett says Mike Smith will get the start in net tonight against the Calgary Flames.

Forward Vladimir Tarasenko will make his season debut Saturday night against the Los Angeles Kings according to The Athletic's Jeremy Rutherford.

Tarasenko has been out while recovering from off-season shoulder surgery, his third surgical shoulder procedure in the last 28 months.

Give him a lot of credit battling back from his third shoulder surgery in 28 months.

Here’s our story on what doctors say regarding his return. #stlblues https://t.co/9jGmj4e3mI

Boston Bruins defenceman Brandon Carlo was released from the hospital Saturday, one day after he sustained an upper-body injury against the Washington Capitals.

Carlo was injured at 18:27 of the first period after a hit by Capitals forward Tom Wilson and was taken to the hospital in an ambulance.

"So he's back home," Bruins coach Bruce Cassidy said. "Hasn't been at the rink, obviously. That's all I got from the trainers this morning."

There was no penalty called on the play, but Wilson will have a hearing with the NHL Department of Player Safety.

The 24-year-old has two goals and one assist in 21 games this season.

Defenceman Cale Makar is doubtful to return from an upper-body injury as the Avs take on the Anaheim Ducks Saturday, writes Ron Knabenbauer of NHL.com.

Makar last played on Feb. 26 and has missed the last four games with the ailment. Colorado also plays Monday against the Arizona Coyotes and Knabenbauer writes he is unlikely to return then as well.

Makar has one goal and 13 assists in 15 games so far this season.

Meanwhile, according to The Athletic's Peter Baugh, forward Nathan MacKinnon is likely to miss "a couple more games" as he continues to recover from a hit from Joachim Blichfeld of the San Jose Sharks. Blichfeld was suspended two games for an illegal check.

Where the Avs stand w/ injuries:

-MacKinnon is probably going to miss a couple more games after the San Jose hit
-Makar is progressing but still out
-Byram and Calvert skated today. Calvert went through morning skate in a non-contact jersey
-No timeline on EJ and Francouz

The Hurricanes announced Saturday morning that they have signed goaltender Beck Warm to a two-year, entry-level contract.

The #Canes have signed goaltender Beck Warm to a two-year, entry-level contract. Warm is 4-0-0 with a 2.25 GAA and .940 save% in four games with the Chicago Wolves this season.https://t.co/1JHKhaIErq

The Flyers have removed Joel Farabee from the COVID-19 Protocol Related Absence list. The team announced he is available to play Saturday against the Pittsburgh Penguins.

The Flyers have removed Joel Farabee from the COVID Protocol Related Absence list. He is available to play today in #PHIvsPIT. pic.twitter.com/sYTBHNmOFR