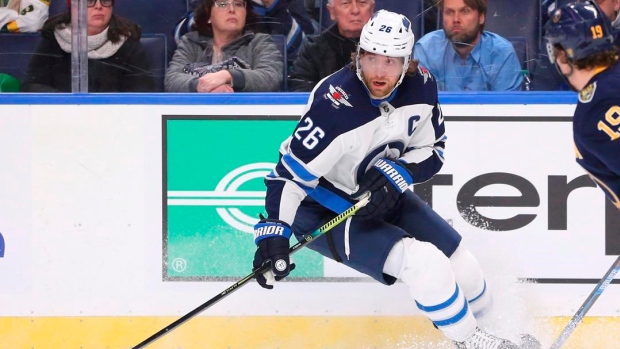 Captain Blake Wheeler skated with the team Monday for the first time since being injured on Dec. 10.

Wheeler, who has one goal and 17 points in 22 games this season, was wearing a non-contact jersey during the practice.

Blake Wheeler was back on the ice with #NHLJets for first time since being injured in Dec 10th game vs VAN pic.twitter.com/g4WKBSUlfi

The Jets are scheduled to face the Washington Capitals on Tuesday.

Dave Lowry provided an update on Wheeler following practice: "It's a positive he's on the ice, and a positive for the group. Whether or not he's an option, we'll see how the week progresses."

"It's a positive he's on the ice, and a positive for the group. Whether or not he's an option, we'll see how the week progresses."

Dave Lowry with an update on Blake Wheeler's status, thoughts on his first month as interim head coach, and more.

The Oilers have placed goaltender Stuart Skinner in the league's COVID protocol.

Head coach Dominique Ducharme confirmed that forward Josh Anderson and defenceman Chris Wideman will return to the lineup on Monday afternoon against the Arizona Coyotes. Michael Pezzetta and Corey Schueneman will be scratched to make room in the lineup.

Goaltender Cayden Primeau will get the start.

Dominique Ducharme confirms that Josh Anderson and Chris Wideman are back in the lineup today in place of Michael Pezzetta and Corey Schueneman.

Cayden Primeau gets the start in goal.

The Canadiens assigned  forwards Rafael Harvey-Pinard and Jesse Ylonen to the AHL's Laval Rocket ahead of Monday's game against the Arizona Coyotes.

Hurricanes forward Martin Necas has entered the NHL's COVID protocol, the team announced on Monday. The 23-year-old has eight goals and 13 assists in 33 games this season.

The forward alignment at today’s practice, following the announcement of Martin Necas to the COVID Protocol list:

The Sabres have recalled defenceman Mattias Samuelsson and reassigned defenceman Casey Fitzgerald to the taxi squad, the team announced Monday.

The team also announced that it has placed Ukko-Pekka Luukkonen, Zemgus Girgensons, and Colin Miller on injured reserve.

Per head coach Don Granato, Ukko-Pekka Luukkonen, Zemgus Girgensons and Colin Miller have all been placed on injured reserve.

The Red Wings have placed goaltender Thomas Griess in the leagues COVID protocol and recalled goalie Calvin Pickard from the taxi squad.

UPDATE: The #RedWings have placed goaltender Thomas Greiss in the NHL's COVID-19 protocol.

UPDATE: Goaltender Calvin Pickard has been recalled from the #RedWings taxi squad. pic.twitter.com/6avd1QIkvd

The Stars have removed Denis Gurianov, Braden Holtby and two support staff members from the league's COVID protocol on Monday.

The team also placed Tanner Kero is the COVID protocols.

The Dallas Stars have placed Tanner Kero and a support staff member into the NHL’s COVID-19 protocol.

Bruins head coach Bruce Cassidy said that Tuukka Rask will start Tuesday vs. the Carolina Hurricanes, while Connor Clifton, ho was activated from the COVID protocol, could return Tuesday. Forward Nick Foligno returned to practice but will not return Tuesday.

▪️Tuukka Rask will start tomorrow vs. Carolina
▪️Connor Clifton, back from COVID-19 protocol, could play vs. Hurricanes
▪️Nick Foligno was back at practice but won't play tomorrow
▪️Trent Frederic and John Moore have not resumed skating pic.twitter.com/RHG7Wbz6Xx