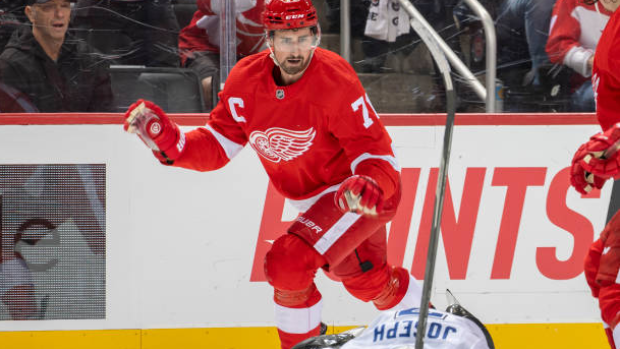 Head coach Jeff Blashill says the team will be without captain Dylan Larkin tonight against the Montreal Canadiens for personal reasons.

He did not participate in Monday's practice, taking what Blashill called a "maintenance day."

The 25-year-old has three goals and five assists in eight games this season.

The Habs have recalled forward Alex Belzile from the AHL's Laval Rocket.

The 30-year-old has a goal and three assists in six games with Laval this season. He has appeared in two NHL games in his career, recording one assist.

Montreal sent down Cole Caufield to the Rocket on Monday and placed Mathieu Perreault on the injured reserve. The club will also be without forward Cedric Paquette for two games as he was suspended for boarding Anaheim Ducks winger Trevor Zegras.

Head coach Dominique Ducharme says that Brendan Gallagher will take part in tonight's pregame warmup and then will be a game-time decision. He missed Sunday's 4-2 loss to the Ducks due to injury.

Jeff Petry took part in the morning skate and is probable to play against the Detroit Red Wings.

Michael Pezzetta, who was recalled from the Rocket on Monday, will make his NHL debut against Detroit. He has six points in eight games with Laval this season.

#Habs Ducharme says Gallagher will take part in tonight’s pregame warmup and then will be a gametime decision. Petry did today’s optional morning skate and is probable vs #RedWings. @TSN_Edge

Per TSN's Mark Masters, goaltender Jack Campbell is the first goalie off the ice at Leafs morning skate and is projected to start against the Vegas Golden Knights.

Campbell is 3-2-1 in seven appearances this season, with a .918 save percentage and 2.31 GAA. He last played on Oct. 27 in Toronto's 3-2 overtime win over the Chicago Blackhawks.

The Jets have recalled goaltender Mikhail Berdin from the AHL's Manitoba Moose on an emergency basis.

The 22-year-old has a 3-3-0 record with the Moose this season, with a .893 save percentage and 2.69 goals-against average along with two shutouts.

The club has also reassigned forward Kristian Vesalainen to the AHL. The 22-year-old has one goal in eight games with the Jets this season.

Forward Scott Sabourin has cleared waivers. He has appeared in one game with Senators, going scoreless.

Flames lines ahead of tonight's game vs. Nashville per TSN's Salim Valji:

Burakovsky unlikely, but we’ll see. Rest of other injured dudes are out. pic.twitter.com/LB4451pTwl

Projected lineup against the Arizona Coyotes:

Defenceman Ryan Ellis remains out with a lower-body injury that has kept him out the last four games.