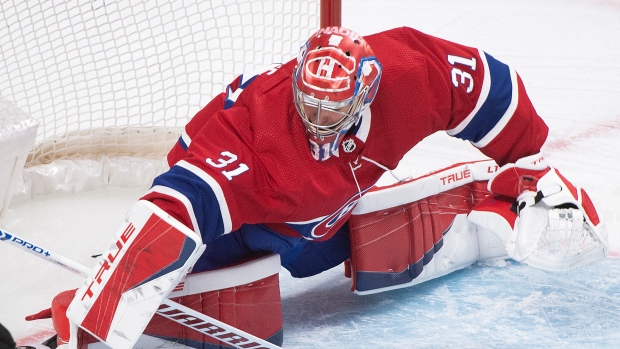 Star goalie Carey Price, who has missed the past two weeks with a concussion, is expected to skate with the Habs on Tuesday, head coach Dominique Ducharme said on Monday.

#Habs Gallagher and Weber going for a skate. Weber has a left-handed stick (instead of his normal right-handed twig), which might suggest his upper body injury is to his left hand or arm. pic.twitter.com/J9uytsDToC

Ducharme doesn't think injured forward Brendan Gallagher, out with a broken thumb, will return before season’s end but is hopeful he’ll be available for the start of the playoffs.

Ducharme says he doesn’t think Gallagher will return before season’s end but is hopeful he’ll be available for the start of the playoffs.@TSN_Edge

The Habs assign defenceman Xavier Ouellet to the AHL’s Laval Rocket. Jake Allen will start between the pipes Monday against the Leafs.

The Canadiens have assigned defenseman Xavier Ouellet to the AHL’s Laval Rocket.

Evgeni Malkin will return to the Pittsburgh Penguins lineup Monday for the first time since March 16.

Malkin, who was cleared for full contact last Wednesday, has missed 23 games after being injured on a hit from Boston Bruins defenceman Jarred Tinordi.

In other injury news, forward Evan Rodrigues is out day-to-day while defenceman Mike Matheson is sidelined week-to-week with injuries. Forward Brandon Tanev will not play Monday against the Philadelphia Flyers.

Head coach Craig Berube told the media after Monday's skate that there's a good chance star forward Vladimir Tarasenko will return against the Anaheim Ducks. The 29-year-old has four goals and 10 assists over 23 games this season.

There’s a good chance Tarasenko will play tonight, per Berube, and Clifford would come out. #stlblues

Star forward Artemi Panarin will not skate with the Rangers on Monday morning due to maintenance. Chris Kreider, Jacob Trouba, Ryan Lindgren and Brett Howden will all miss New York's game against the Washington Capitals at Madison Square Garden.

UPDATE: Chris Kreider, Jacob Trouba, Ryan Lindgren and Brett Howden are all out tonight. Artemi Panarin (maintenance) is also not skating this morning.

Rookie goalie Spencer Knight gets the nod for the Panthers between the pipes for Monday's game against the Dallas Stars while Philippe Desrosiers will serve as the backup.

Forward Mason Marchment will return to the lineup and fellow forward Sam Bennett is sidelined with an upper-body injury.

• Spencer Knight will start tonight
• Philippe Desrosiers will back up
• Mason Marchment returns
• Sam Bennett (upper body) is day-to-day
• Chris Driedger & Patric Hornqvist could get in vs. Tampa#DALvsFLA