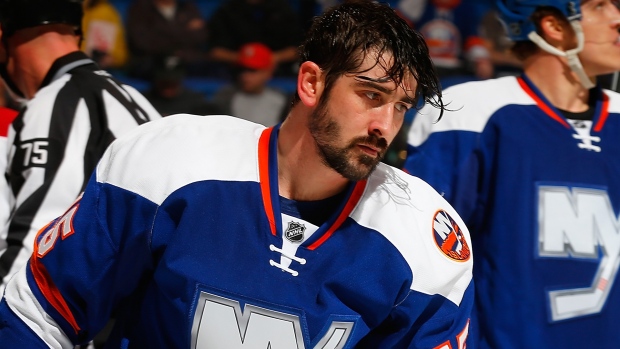 #Isles Transactions: Cal Clutterbuck has been placed on LTIR and been assigned to Bridgeport on conditioning. Kieffer Bellows has been loaned to Bridgeport. Otto Koivula and Andrew Ladd have been recalled from loan (Bridgeport).

The 32-year old has been sidelined since the team's December 19th match up against the Boston Bruins where Clutterbuck has his wrist cut in a freak accident by Bruins forward, Patrice Bergeron.

In Clutterbuck's replacement, the Islanders recalled Otto Koivula and Andrew Ladd from their AHL afffiliate, Bridgeport Sound Tigers and have sent Kieffer Bellows down to make roster space.

Additionally, Islanders head coach, Barry Trotz announced that forward Derick Brassard is day to day after suffering an upper-body injury on Wednesday against the Washington Capitals.

Trotz says Brassard is day to day and will not play tonight. pic.twitter.com/pQP3iX6X9F

The 32-year old from Hull, Que. was taken by the Columbus Blue Jackets with the sixth-overall pick in the 2006 NHL Draft and proceeded to play six years for the team. After that, Brassard spent time with several other teams before joining the Islanders in August of 2019 as free agent.

The Toronto Maple Leafs announced Friday afternoon that they have loaned forward Egor Korskov to their AHL affiliate, Toronto Marlies.

The 23-year old from Novosibirsk, Russia made his NHL debut for the Toronto Maple Leafs on February 16th against the Buffalo Sabres where he recorded his first NHL goal in the team's 5-2 loss. During his time with the Marlies this season, Korshkov has recorded 21 points in 35 games.

The Ottawa Senators announced Friday morning that they have recalled forward Josh Norris from the Belleville Senators.

The 20-year old from Oxford, Mich., was the first round selection by the San Jose Sharks in the 2017 draft where he was taken with the 17th pick. Norris never went on to play a game for the Sharks as he split time with the University of Michigan and the USA under 20 team before having his rights traded to the Senators in 2018. This season with the Belleville Senators, Norris has recorded 58 points through 50 games. His call up comes at a time where there is much trade speculation revolving around the Senators' franchise as there are few days left before the February 24th deadline.

Kahun blocks a shot and is in some pain. An athletic trainer comes out to the ice to take a look. Malkin and Pettersson help Kahun skate off the ice. Kahun heads down the runway.

Kahun's injury comes just two days after he was cleared to come back from a concussion he suffered back in January.

The 24-year old from Planá, Czech Republic began his NHL career in the 2018/19 season where he appeared in all 82 games for the Chicago Blackhawks recording 37 points. He was traded by the Blackhawks to the Penguins in 2019.

Penguins head coach, Mike Sullivan announced that Kahun's status is now day-to-day and will be a game-time decision Saturday against the Buffalo Sabres.

#CBJ add F Calvin Thurkauf on emergency recall from @monstershockey. D Gabriel Carlsson has been assigned to the AHL club.https://t.co/f69tJr6mqt

This emergency call up comes on the heels of an injury that forward, Oliver Bjorkstrand suffered against the Philedelphia Flyers on Thursday night.

In 47 games with the Monsters this season, Thurkauf has recorded 25 points. In 40 games played with the Blue Jackets, Carlsson has recorded only 12 points.

The New Jersey Devils announced via their Twitter that goaltender, Louis Domingue has cleared waivers and will be assigned to their AHL affiliate, Binhamington Devils.

The 27-year old from St-Hyacinth, Que., has struggled so far this season as he has only seen three wins in 14 starts with his last win coming against the Tampa Bay Lightning on January 12th. During his now seventh year in the NHL, he has yet to cement himself as a true starter as he and Mackenzie Blackwood have shared the Devils' net this season. Prior to his acquisition by the Devils in a trade with Tampa Bay which cost them a seventh-round pick in the 2021 NHL Draft, Domingue has previously spent time with the Lightning, and the Coyotes who drafted him in the 5th round of the 2010 NHL Entry Draft.

The Detroit Red Wings announced that they have claimed defenceman Cody Goloubef off waivers from the Ottawa Senators and have assigned defenceman Brian Lashoff to their AHL affiliate, Grand Rapids Griffins.

The 30-year old from Mississauga, Ont. was taken by the Columbus Blue Jackets with the 37th overall pick in the 2008 NHL Draft. During his five years in Columbus, Goloubef recorded only 92 games played with the NHL club as he split time with their AHL affiliate, Springfield Falcons-who later became the Cleveland Monsters. There, he played in 201 games and recorded 70 points before being moved to the Colorado for a single season before joining the Ottawa Senators.