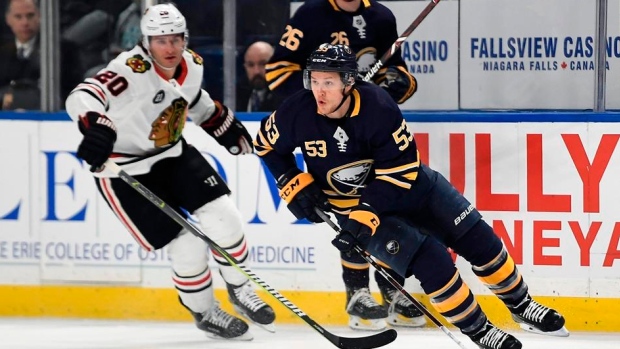 Projected lineup vs. Winnipeg Jets in Dominque Ducharme's first game behind the bench.

Forward Derek Stepan has been placed on injured reserve.

D Erik Brannstrom and C Matthew Peca have been recalled from the team's taxi squad.

C Logan Brown has been recalled from @BellevilleSens and re-assigned to the taxi squad.

C Derek Stepan has been placed on IR.

Brannstrom has appeared in seven games for the Senators this season, recording one goal and two assists. Peca has one assist in one game this season.

Stepan has one goal and five assists in 20 games for the Sens.

Defenceman Sami Niku returns to the lineup tonight against the Montreal Canadiens. The 24-year-old has appeared in three games for the Jets this season.

Thatcher Demko will start in net against the Edmonton Oilers tonight.

Head coach Ralph Krueger said Jeff Skinner skated with the taxi squad Thursday and will be a healthy scratch against the New Jersey Devils for the third straight game. Skinner has just one assist in 14 games for Buffalo this season.

Defenceman Rasmus Ristolainen was on the ice at practice Thursday for the first time since going on the NHL's COVID-19 Protocols list in early February. Ristolainen is still not expected to play tonight against the  - The Athletic

Rasmus Ristolainen is on the ice with the Sabres for the first time since going into COVID-19 protocols Feb. 2.

Not expected to play tonight, but a big step. pic.twitter.com/8g2Nk7jNkK

Ristolainen has two goals and four assists in 10 games for the Sabres this season.

Defencemen Zach Werenski and Michael Del Zotto return to the lineup tonight against the Chicago Blackhawks.

Three changes to the #CBJ lineup tonight from Tuesday's effort.

Forward Roope Hintz will remain out against the Florida Panthers with a lower-body injury.

Jake Oettinger will start for the Stars in goal. Roope Hintz still out with a lower body injury.

Head coach Mike Sullivan said forward Jason Zucker will be out "longer-term" with a lower-body injury.

Coach Sullivan on Zucker's injury status: "Zuck is going to be out longer-term with a lower-body injury."

Zucker was injured in the Penguins' win over the Washington Capitals on Tuesday. He had to be helped off the ice after falling awkwardly into the boards in the third period.

The 29-year-old has four goals and three assists in 17 games for the Penguins this season.