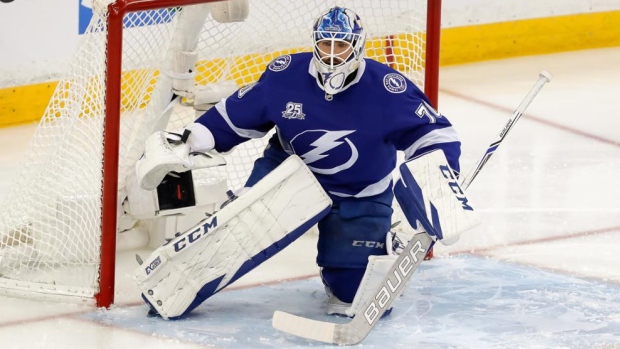 The @MapleLeafs have assigned goaltender Brandon Halverson to the Toronto Marlies (AHL).

Goaltender Kasimir Kaskisuo has been placed on waivers.

Here the lines and the players the Toronto Maple Leafs will take to Buffalo for Saturday's game.

This group is going to Buffalo

This group is going to Buffalo

Ottawa Senators lines for Saturday's game against the Montreal Canadiens.

The Canadiens have trimmed their training camp roster by 14 players.#GoHabsGo https://t.co/QVGrcvwVEY

The Tampa Bay Lightning have assigned goaltender Louis Domingue to Syracuse Crunch of the AHL.  The hope from both the team and player is that another NHL team makes a call to acquire the goaltender before the start of the season, according to TSN Hockey Insider Pierre LeBrun.

Louis Domingue assigned to Syracuse. The hope from Tampa Bay and Domingue is that an NHL team calls for him before the start of the season.

The #MNWild have placed Sam Anas, Colton Beck, Gabriel Dumont, Mike Liambas and Hunter Warner on waivers today. They will be assigned to @IAWild on Sunday if they clear waivers. pic.twitter.com/hNPq4Admnq

Here is the Canucks line-up from Saturday's morning skate in Salt Lake City.

Salt Lake goodness. Here’s how they lined-up this morning. pic.twitter.com/yRAt4frOtI

The Vegas Golden Knights have assigned Tyrell Goulbourne, Brett Lernout and Jaycob Megna to the Chicago Wolves of the AHL.

Tyrell Goulbourne, Brett Lernout and Jaycob Megna have been reassigned to the Chicago Wolves 🐺#VegasBorn

The Los Angeles Kings have assigned Akil Thomas to the Niagara IceDogs and loaned Samuel Fagemo to Frolunda HC of the Swedish Hockey League.

The LA Kings have assigned Akil Thomas to his junior team, @OHLIceDogs. Samuel Fagemo has been loaned to @frolunda_hc of the Swedish Hockey League. https://t.co/WG3EvSqZar