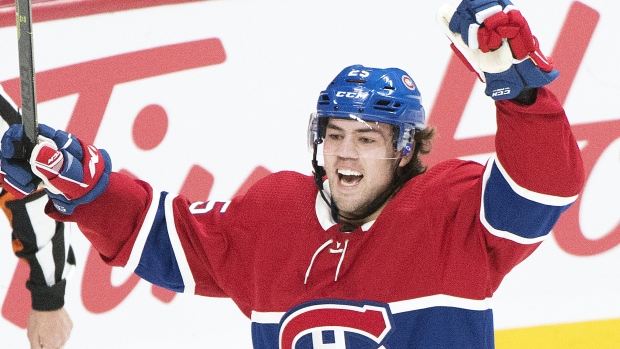 The Habs have recalled rookie forward Ryan Poehling from the AHL. He was sent down to Laval after Wednesday's game against the Ottawa Senators. In five games with the Habs this season, Poehling has zero points.

Montreal skated this morning ahead of Saturday's home matchup with the Detroit Red Wings. Paul Byron participated in his first full practice since having surgery to repair a knee injury and appears to be available against the Red Wings after missing 13 games.

Byron has accumulated four points in 19 games played for the Canadiens this season.

Here are the forward lines and defensive pairings from Friday's practice at the Bell Sports Complex in Brossard.#GoHabsGohttps://t.co/uuAkDUBJRp

The lines appear to be as follows:

The Maple Leafs have loaned forward Nic Petan to the AHL.

Injured forward Trevor Moore appears to be nearing a return to the lineup following a 12-game absence on long-term injured reserve. Coach Sheldon Keefe says Moore's status will be confirmed tomorrow. The Leafs are expected to make a corresponding move in order to have an salary cap-compliant roster.

It would appear, based on Trevor Moore taking a regular rush in #Leafs practice, that he's ready to return from a shoulder injury. #Leafs would need to make a corresponding roster move to get him back off LTIR.

Michael Hutchinson was first off of the ice at Friday's practice and appears to be Saturday night's starter in Edmonton.

The Winnipeg Jets have loaned talented forward David Gustafsson to Team Sweden for the 2020 World Junior Championship being held in Czech Republic.

Gustafsson is a 2019 returnee and posted three assists for Sweden in last year's tournament.

The 19-year-old has one goal in 22 games played for the Jets this season. He was drafted in the second round (60th overall) in the 2018 NHL Draft.

#NHLJets have loaned forward David Gustafsson to Sweden for the 2020 World Junior Championship.

Sens forward Scott Sabourin practiced without a non-contact sweater this morning for a second consecutive day. The 27-year-old continues to progress his recovery after suffering a gruesome head injury due to a collision with David Backes on Nov. 2 against the Boston Bruins.

Sabourin originally returned to the ice on Dec. 9 in a non-contact practice jersey. He has two points in 11 games since making his NHL debut this season.

Another positive sign. Scott Sabourin is on the ice for the 2nd day in a row in a regular jersey. pic.twitter.com/SsX0XmCVlr

However, the Sens will be without forward Dylan DeMelo for an extended period of time due to a broken finger. He sustained the injury on Wednesday against the Montreal Canadiens. The 26-year-old has six points in 32 games so far this season.

Dylan DeMelo broke his finger Wednesday in Montreal. Will be out for an extended period. #Sens

Anders Nilsson will look to build upon his 8-8-2 record as he's expected to start Saturday against the Columbus Blue Jackets.

Anders Nilsson gets the start in goal tomorrow afternoon against the Blue Jackets. pic.twitter.com/XI7uMG7ZUE

Calgary announced that forward Matthew Phillips has been assigned to the AHL's Stockton Heat. The 21-year-old has 25 points in 23 games with the Heat this season.

The Canucks recalled defenceman Guillaume Brisebois from the AHL's Utica Comets and have assigned defenceman Jalen Chatfield in a corresponding move. Brisebois, 22, has 11 points in 26 games for Utica.

The Rangers have recalled Russian forward Vitali Kravstov from the KHL's Traktor Chelyabinsk and have assigned him to the AHL's Hartford Wold Pack. Kravstov has played five games with the Wolf Pack this season, collecting one assist during that stint.

OFFICIAL: #NYR have recalled Vitali Kravtsov from Traktor (KHL) and have assigned him to @WolfPackAHL. pic.twitter.com/gcP4jV9BM3

Penguins forward Joseph Blandisi has been reassigned to the AHL's Wilks-Barre/Scranton Penguins following an emergency recall on Dec. 12. The 25-year-old has played in 12 games for the Pens this season and has accumulated three points in that time.

The Penguins have re-assigned forward Joseph Blandisi to the @WBSPenguins.

The St. Louis Blues have assigned forward Austin Poganski to the AHL's San Antonio Rampage after making his NHL debut on Dec. 10 versus the Buffalo Sabres. The 23-year-old did not register a shot, hit, or point in 5:54 time on ice. Poganski has 13 points in 22 games with the Rampage.

Austin Poganski has been assigned to the @sarampage. https://t.co/dTWOul1o5e #stlblues

The Red Wings anticipate that forward Anthony Mantha back in the lineup following an eight-game absence due to a knee injury. The 25-year-old had tallied 23 points in 25 games prior to the injury.

Additionally, Andreas Athanasiou is likely to return tomorrow against the Montreal Canadiens.

Coach Blashill anticipates both Mantha and Athanasiou will play tomorrow in Montreal. #RedWings

Defenceman Madison Bowey has been recalled from the AHL's Grand Rapids Griffins after posting an assist on the team's game-winning-goal against the San Diego Gulls on Dec. 11. It also happened to be Bowey's debut for the Griffins after clearing waivers on Dec. 10.

Bowey has played 22 games for the Red Wings this season and 39 overall since being acquired in a trade with the Washington Capitals last year. He has one goal and seven assists in 2019-20.

Newly appointed head coach Rick Bowness revealed that goaltender Ben Bishop will start in between the pipes tonight against the Vegas Golden Knights. Bishop is 12-6-2 with a .934 save percentage and a 2.03 goals-against average this season.

Pavel Francouz is expected to start tonight after being the first goaltender off of the ice at morning skate. He has an 8-2-1 record with a .927 save percentage and 2.37 goals against average.

Francouz gets the start tonight.

The Avs will be without star rookie defenceman Cale Makar for a third consecutive game after suffering an upper-body injury against the Boston Bruins on Dec. 7. Head coach Jared Bednar said Makar could return on Monday when the Avs take on the St. Louis Blues.

Louis Domingue is expected to start on the road tonight against the Colorado Avalanche.

Additionally, Nico Hischier is expected to make his return to the Devils' lineup after being sidelined for three games on injured reserve.

Devan Dubnyk is expected to join the Minnesota Wild for their upcoming three-game road trip next week beginning in Las Vegas. The 33-year-old netminder is 4-8-2 with a .893 save percentage and 3.35 goals-against average this season prior to his absence from the team, which was due to personal reasons.

📹 Hear from Bruce Boudreau and Devan Dubnyk with a practice update.#mnwild pic.twitter.com/Eg2S7Of3Dd

As a result of loaning forward Barrett Hayton to Team Canada for the World Junior Championship, the Coyotes have recalled forward Brayden Burke from the AHL's Tucson Roadrunners. Burke has notched 24 points in 24 games with Tucson.

Wild forward Gerald Mayhew has been reassigned to the AHL's Iowa Wild. The 26-year-old has been stellar for Iowa and will look to build upon his 20 points recorded in 22 games. Mayhew has also posted two points in six games with Minnesota this season.

NEWS: The #mnwild has reassigned forward Gerald Mayhew to Iowa.