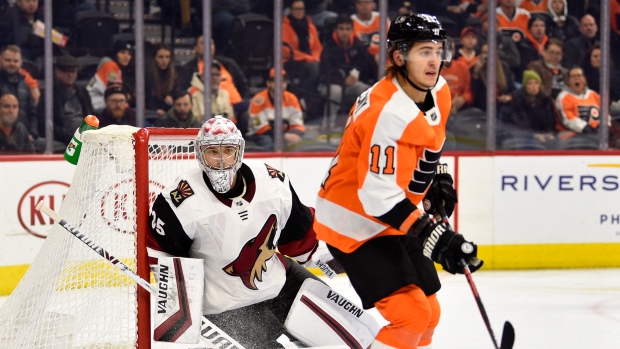 The Flyers announced Travis Konecny has a concussion and is out indefinitely. The 22-year-old centre was hurt Saturday in a win over the Ottawa Senators. Konecny has 11 goals and 17 assists over 30 games with the Flyers in 2018-19.

Forward Travis Konecny has a concussion. He is out indefinitely.

Defenceman Cale Makar was absent from practice Monday and has been ruled day-to-day with an upper-body injury.

Goaltender Philipp Grubauer is also day-to-day with a lower-body injury.

Veteran forward Patrice Bergeron will return to the lineup Monday night against the Ottawa Senators after being out since Nov. 23 with a lower-body injury. The 34-year-old has eight goals and 16 assists over 21 games this season in Boston.

Bruce Cassidy confirms that Patrice Bergeron is back in tonight. #NHLBruins

Head coach Jon Cooper said forward Tyler Johnson will miss Monday's game against the New York Islanders with a lower-body injury and there is no timetable for his return. The 29-year-old has seven goals and seven assists over 27 games with the Bolts this season. Mitchell Stephens will make his NHL debut as Johnson's replacement.

Tyler Johnson (lower body) will be out for tonight’s game and Coop says he’s being checked out today, no timetable for return yet.