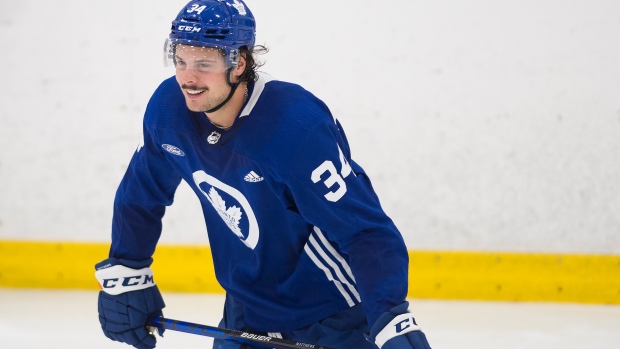 As NHL training camps continue on Tuesday, keep updated on all the injury news and roster updates from around the with daily Ice Chips.

The goal scorers (in order):

Prior to the scrimmage, Pierre Engvall was elevated to the team's NHL group on Wednesday, replacing Alex Kerfoot.

Kerfoot is considered day-to-day after sustaining an injury on Tuesday.

Defenceman Joseph Duszak was also added to the team's training camp roster. The 23-year-old had three goals and 18 points in 23 games with the AHL's Toronto Marlies last season.

#Leafs are scrimmaging at their third day of on-ice training camp sessions. Pierre Engvall has moved into the NHL group as well, replacing an injured Alex Kerfoot.

Also, Joseph Duszak has been added to the Leafs' camp roster pic.twitter.com/nFAk3DUXgu

Josh Yohe of The Athletic reports did collide with teammate Cody Ceci earlier in the session, but also had been dealing with issues with his skates.

Sidney Crosby leaves the scrimmage and heads to locker room. He received a big hit earlier. And his skates have been driving him nuts today. Not sure if his departure is health or equipment related.

Forwards Dylan Cozens and Jack Quinn were added to the team's training camp roster on Wednesday and will join the team on ice in the coming days after competing in the World Junior Championship.

Cozens, selected seventh overall in the 2019 NHL Draft, finished second in tournament scoring with eight goals and 16 points in seven games en route to winning a silver medal with Canada.

Quinn, selected eighth overall in the 2020 NHL Draft, posted one goal and five points in seven games with Team Canada.

Forwards Dylan Cozens and Jack Quinn have been added to our training camp roster and are expected to join the team on the ice in the coming days. pic.twitter.com/xIIiyXyml9

Jack and Linus are back 😁#LetsGoBuffalo pic.twitter.com/bj7SjLg6ye

The Sabres also added defenceman Ryan Jones to the roster on a professional tryout contract on Wednesday. Jones, a fourth-round pick of the Pittsburgh Penguins in 2016, spent the past four seasons at the University of Nebraska-Omaha.

Team Blue picked up a 3-2 win over Team White in the Jets' scrimmage on Wednesday, with Trevor Lewis and Jansen Harkins each posting a goal and an assist.

Trevor Lewis and Jansen Harkins (GWG) each had a goal and an assist.

Here's the rosters for each team:

TRAINING CAMP: Here are the groups for tomorrow's scrimmage. pic.twitter.com/NrlLHKdPZS

The team used the following lines during their first skate Wednesday:

The team said the following lines would be used during Wednesday's skates:

"I thought Colin White continues to impress," Smith said. "I thought Anisimov scored another goal today and get a breakaway. I thought Chabot was probably at his best skating really well, being physical, and there was a lot of guys that played well but those 3 particular stuck out."

The team used the following lines at Wednesday's scrimmage:

Here are your #sens practice lines for today. https://t.co/36y017qarP

The team was using the following lines during their first skate on Wednesday:

Zdeno Chara took part in his first skate with the Capitals on Wednesday.

CAPS TODAY: Zdeno Chara took the ice as a Capital for the first time yesterday and enters the 2020-21 season 12 games shy of passing Nicklas Lidstrom for the fifth-most games played by a defenseman in NHL history. More info on Chara and Caps Clips at https://t.co/HecIC0ECg1 pic.twitter.com/Lp70yx73q9

The team used the following lines during Wednesday's skate, per Tom Gulitti of NHL.com