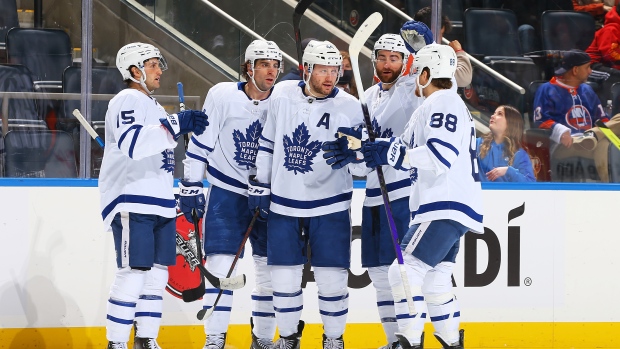 The Toronto Maple Leafs shuffled their forward lines at practice on Monday ahead of a matchup with the visiting Anaheim Ducks on Wednesday.

William Nylander worked on the wing of the third line with Alex Kerfoot and David Kampf.

Anderson has zero points in four games so far this season for the Leafs, while Dahlstrom did not record a point in his lone Leaf outing this season.

Kallgren has yet to appear in a game at the NHL level.

🏒 Kase, Holl back from COVID protocol

Blueliner Jake Muzzin, who has missed time with a concussion skated in a red sweater, while forwards Kyle Clifford and Nick Ritchie were in scratches sweaters.

Roster update: The #Sens have re-assigned the following three players to @BellevilleSens.

None of the three saw the ice during Ottawa's 2-1 victory over the Columbus Blue Jackets on Sunday.

John Carlson (covid protocols) is on the ice for the Capitals' morning skate ahead of their game tonight vs Vegas.

He assumed his spot on the Caps' first defensive pairing and top power-play line after being placed in COVID-19 protocol last week, missing the last four games.

The 32-year-old has eight goals and 24 assists in 32 games so far this season.

Meanwhile, head coach Peter Laviolette said that forward T.J. Oshie remains day-to-day as he battles an upper-body injury. Oshie is on the injured reserve list after leaving a game earlier this month against the New York Islanders with the ailment.

Defenceman Nick Jensen is week-to-week with an upper-body injury he suffered Thursday against the Boston Bruins.

Here were Washington's lines Monday morning according to Pell:

The Rangers have recalled goaltender Adam Huska to the taxi squad, it was announced Monday morning.

He has one NHL appearance so far this season and owns a goals-against average of 2.49 and a save percentage of .913 in 12 AHL games.

The Flyers have recalled forwards Linus Sandin and Connor Bunnaman as well as goaltender Felix Sandstrom from the AHL's Lehigh Valley Phantoms to the taxi squad.

Transactions: We have recalled Linus Sandin, Connor Bunnaman and Felix Sandstrom to the club's Taxi Squad from the @LVPhantoms (AHL). pic.twitter.com/wNxNn4tltg