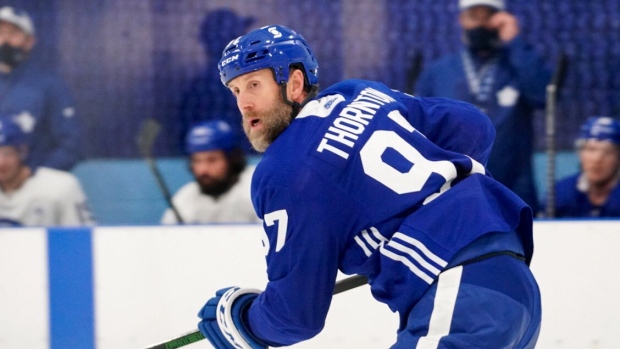 Forward Joe Thornton practiced on the top line alongside Auston Matthews and Mitch Marner on Sunday. He is poised to return to the lineup after missing 10 games with a fractured rib.

Jesse Puljujarvi returned to Oilers practice Sunday and, as expected, rejoined the top line alongside Connor McDavid and Ryan Nugent-Hopkins. Here are the team's forward lines in practice:

Head coach Ralph Krueger and defenceman Rasmus Dahlin both returned to Sabres practice on Sunday. Both had been on the NHL'S COVID Protocol list.

Head Coach Ralph Krueger and Rasmus Dahlin are both back at practice today! 🙌 pic.twitter.com/8iO7fR9GWR

Dahlin, 20, has recorded one goal and two assists in 10 games this season.

The Sens have recalled goaltender Joey Daccord and re-assigned him to the team's taxi squad.

Roster update: The #Sens have recalled goaltender Joey Daccord and re-assigned him to the team's taxi squad.

Daccord has played one game with the AHL's Belleville Senators this season and has a 0-1-0 record with a 5.01 goals against average and .861 save percentage.

Tristan Jarry will get the start in goal for the Penguins in Sunday afternoon's matchup with the Washington Capitals. Maxime Lagace has been recalled from the taxi squad on an emergency basis. He will back up Jarry on Sunday.

The Penguins have recalled goaltender Maxime Lagace from the taxi squad on an emergency basis.

Lagace will back up goaltender Tristan Jarry for today’s game.

Defenceman Marcus Pettersson will not be available for Sunday's game as he continues his recovery from an upper-body injury. The 24-year old took part in a full-contact practice Saturday and the team is encouraged by his progress.

Coach Sullivan on Pettersson: "Marcus will not be available today. Our doctors and medical staff need to give him the green light. We're certainly encouraged with the progress he's made - he participated in a full practice. We will see how he reacts to that."

Pettersson has played four games this season, recording one goal.

The Capitals have assigned goaltender Ilya Samsonov to the Hershey Bears of the AHL.

Harpur, 26, has not played in the NHL since the 2018-19 season, when he was with the Ottawa Senators. He has one goal and six assists in 103 career games.

Kings back on the ice this morning in El Segundo!