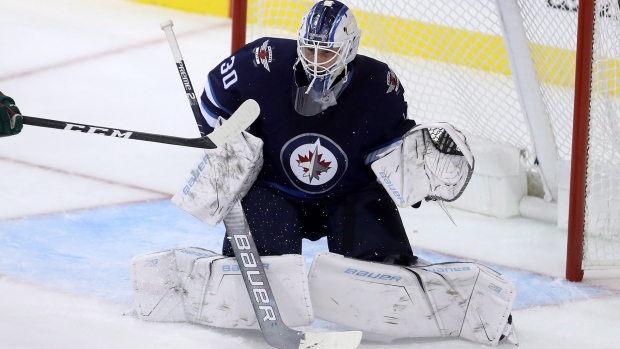 Goaltender Laurent Brossoit will start tonight against the Chicago Blackhawks, per Ken Wiebe of The Winnipeg Sun.

In six starts and seven appearances, Brossoit has a 5-1-1 record with .935 save percentage and a 2.16 goals against average.

Goaltender Darcy Kuemper will get the start tonight against the Boston Bruins, per Dave Vest of NHL.com.

Per Rick Tocchet: @dkuemps35 will start in goal for @ArizonaCoyotes tonight vs. @NHLBruins. @Adin_Hill will be the backup. @AGally94 skated this morning but will be a game-time decision because of a minor injury. If he doesn’t play, @Bunting27 will make his @NHL debut.

Kuemper has been on injured reserve with a lower-body injury since last playing on Nov. 21.

Edmundson has a goal and six assists in 26 games played this season.

The Ducks announced today that goaltender Ryan Miller sufferered a MCL sprain Sunday against New Jersey and will miss about six weeks.

Miller is in his second year with Anaheim, serving as starter John Gibson's backup.

Forward T.J. Oshie will likely draw back into the Capitals' lineup tonight against the Detroit Red Wings, per Tom Gulitti of NHL.com.

Oshie (concussion) said it looks he will be back in tonight for Capitals vs. Detroit.

Reirden:
“We’ll see how he is tonight. It’s game-time, but things are definitely headed in that direction, so that will be exciting if we can get him back in there tonight.”

Oshie has been out with a concussion since getting thrown to the ice by Winnipeg's Josh Morrissey in a Nov. 14 game against the Jets.

In 18 games played this season, Oshie has nine goals and five assists.

Forward Jaden Schwartz will return to the Blues' lineup tonight against the Florida Panthers, per Jeremy Rutherford of The Athletic St. Louis.

Schwartz will play tonight. Waiting to see who will be out: Sanford and Kyrou still on the ice. #stlblues

Schwartz has missed the Blues' past 11 games after taking teammate Vladimir Tarasenko's shot to the hand during a game on Nov. 16.

In 15 games played this season, Schwartz has two goals and seven assists.

Forward Patrik Berglund will miss tonight's game against the Kings with an illness, meaning Zemgus Girgensons will be in the lineup, per John Vogl of The Athletic Buffalo.

Patrik Berglund will miss tonight’s game with illness, so Zemgus Girgensons is back in.

Berglund was acquired from the St. Louis Blues in the off-season as part of the Ryan O'Reilly trade, while Girgensons was the Sabres 2012 first-round draft choice.

Forward Mathieu Perreault will play tonight against the Chicago Blackhawks, per The Winnipeg Sun's Ken Wiebe.

#NHLJets F Mathieu Perreault is on the ice and moving well, so early indications are he will be good to go tonight vs #Blackhawks

Perrault was forced to leave Sunday's game against the Philadelphia Flyers after getting tangled up with Dale Weise.

In 29 games this season, Perreault has three goals and seven assists.

Goaltender Petr Mrazek will get the start tonight against the Toronto Maple Leafs.

Mrazek signed a one-year deal with Carolina in the off-season, but has missed time this season with a lower-body injury.

Forward Micheal Ferland will return to the Hurricanes' lineup tonight against the Toronto Maple Leafs, per NHL.com's Michael Smith.

Ferland has missed Carolina's last four games as he's been on injured reserve with a concussion.

In 24 games played this season, Ferland has 11 goals and four assists.

Forward Tom Wilson participated in today's practice wearing a non-contact jersey with the hope of playing in Carolina on Friday, according to Isabelle Khurshudyan of The Washington Post.

Tom Wilson is on the ice in a light-blue non-contact jersey. Could have him on track to play Friday, assuming he’s cleared for a full practice tomorrow.

Wilson has been out with an upper-body injury since leaving last Tuesday's game against the Vegas Golden Knights after taking a blind-side hit from Ryan Reaves.

In 11 games played this season, Wilson has eight goals and six assists.