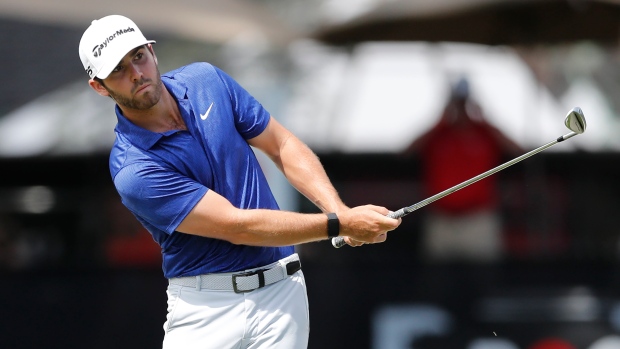 Matthew Wolff, the 21-year-old with the heel-lifting, hip-twisting, off-plane-takeaway golf swing, rolled in nine birdies and an eagle to shoot 64 on Saturday and separate himself from the pack that at times looked like a grid-locked highway at rush hour. As a result, he will head to the final round with the lead at the Rocket Mortgage Classic in Detroit, Mi., looking for his second career win.

And he’s giving most of the credit for his fine play to an unusual source.

"I heard an ice cream truck circling the property and seemed like every time I heard that, I had made birdie or made a putt, so I've got to give a lot of credit to that," said Wolff, who admitted to having a weakness for vanilla in his post-round press conference.

In spite of his hot round, Wolff won’t want to stop and eat a double scoop cone on Sunday. Behind him sits a tangle of golfers with 17 of them separated by just four shots. For most of the day, it was crowded near the top. At one point, eight golfers were tied for top spot while those grouped back in 48th were only four shots behind.

That chase pack includes Bryson DeChambeau and Webb Simpson. DeChambeau birdied four of his last six holes and is three shots back of Wolff. Simpson made just two birdies and a single bogey, coming on the 18th hole, and trails Wolff by six.

The two are inside the top 10 on the world ranking and have the most experience of the chasers when it comes to winning on the PGA tour. Of the top 12 players on the leaderboard DeChambeau and Simpson have combined for 12 victories, the remaining nine have just 10 between them all.

Crowded final-round leaderboards are becoming commonplace in the PGA Tour’s restart. At the Charles Schwab Challenge, 13 players were within three shots of the lead while a week later at the RBC Heritage, there were 14 golfers within the same range.

Wolff’s lone title came last July at the 3M Championship in Blaine, Minn., just a month after he turned professional. He hasn’t managed a top-10 finish since. This week, he decided to reach back to his victory and use a tool that worked for him then.

"I was talking to George, my coach, and a couple other people and I just told myself at the beginning of the week at 3M, I don't care, whatever happens, happens, don't get mad, don't get frustrated, just play golf, do what you know how to do and just have a good time out there," said Wolff. It ended up working out pretty well for me. So I told myself at the beginning of this week to have that same mindset."

So far it’s worked, spurred on by his putter, which has been the key to his fine play this week. He sits second in Strokes Gained: Putting with a strong mark of 6.582. He’s used that club to make 24 birdies through three rounds, first in the field.

"It's a golf course that sets up really well," Wolff stated. "I'm hitting really well, putting good, doing everything well. Just going to go out there, have fun and hopefully I hear the ice cream truck a little bit."

The lone Canadian to make the cut, Adam Hadwin, posted a three-under 69 on Saturday to sit in a tie for 19th. It was the eighth round in his past 11 that Hadwin has logged a score in the 60s.