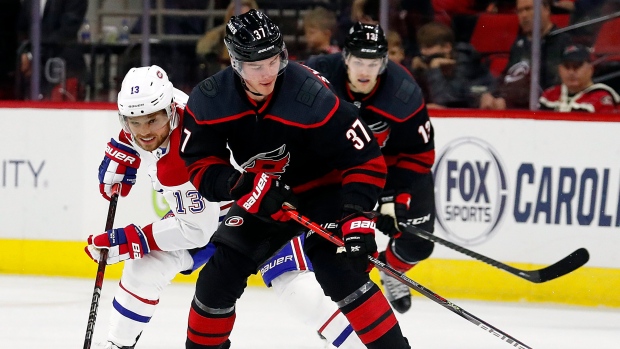 Jared Dupre moved from Long Island,  New York, to Hillsborough, N.C., in 1993 after his father took a job with the University of North Carolina's hospital system.

"I had just finished high school and decided to make the move with him and glad I did it," said Dupre, who grew up a big Rangers fan. "Found out there was an ice rink within bicycle-riding distance of my house and I got to know the manager of the building and I got a part-time job and I just got lucky and got to know the right people in the area down here that kind of steered me in the right path."

That path led to PNC Arena, home of the Carolina Hurricanes, where Dupre has worked since 2001. He has served as the ice technician for the last eight years.

"Just fell into something I love doing on a daily basis," he said. "I like the camaraderie, the atmosphere of the building, the people I work with, I’ve always been someone who's liked the cold so it's kind of fitting. I've always been a hockey fan."

When the NHL season was paused due to the COVID-19 pandemic on March 12, the Hurricanes held the first wild -card spot in the Eastern Conference with hopes of making another long playoff run after reaching the final four a year ago. If the season resumes and Carolina recaptures that magic it likely means games being played in July and perhaps even August.

"That would probably be one of the bigger challenges we would ever have to deal with in this building," Dupre readily admits.

TSN spoke with Dupre by phone on Monday. The following is an edited transcript of the interview.

What's the biggest issue if games are played in the summer?

"Our biggest problem here in North Carolina is the humidity we face at that time of year. Typically in July and August we can have temperatures anywhere from 90 degrees (Fahrenheit) to 115 with 65 per cent humidity outside. We all like to joke about the fact that, 'Hot and humid, plenty of sunshine, chance of afternoon thundershowers,' is pretty much the weather forecast from about the end of May to the beginning of September on a daily basis."

What can you do to combat that humidity?

"Our building has desiccant dehumidifiers on the roof and we try and pull the temperature down and the humidity out of the building, but once the doors open it's basically null and void . Because once the doors are open and all that hot, humid air starts coming in , we can't pull it back out with the people in here. You get 15​,000-plus people in the building for a game, you're adding to the humidity with people talking and yelling and screaming and the general body heat warming the air."

And this isn't just a problem in North Carolina, right?

"Any of the southern teams on the Eastern Seaboard here are dealing with the same issues this time of year."

If the NHL returns, but there are no fans at the game, how much would that help?

The NHL recommendation is for ambient air to be between 60 and 64 degrees at 40 to 44 per cent humidity. How close could you get to that in the summer?

"I couldn't tell you, off the top of my head, what it would be for that time of year. Obviously, the last time we were that deep into the playoffs and it was that warm outside was 2006 when we won the Cup and (chuckle) I wasn't the person in charge of worrying about those things at that time."

How did the ice hold up last year when the team played until May 16?

"We didn't have any issues come up. We did our best to try and control the arena environment to the best of our abilities with the equipment we have on hand. I mean, I didn't hear any negative feedback, but I also didn't hear any positive feedback. It was never really that warm outside. We were kind of lucky in that aspect so we never really had a whole lot of issues."

So, would there be a dramatic drop in the ice quality between May last year and July this year?

"It's kind of anybody's guess, because of the uncertainty of what the weather's going to do. But, definitely the humidity's going to affect the surface."

What happens to the ice now?

"We actually made the decision to take our ice surface out of the building last Wednesday. The higher-ups weighed the options and the smarter option was to take it out and put it back in if needed."

What went into that decision?

"The thought process was it's going to be more cost effective to take it out and not leave it covered with the compressors running or leave it uncovered and have to groom the ice from time to time. It was just a cost-effective decision and we weren't the only ones in the league, there were several other teams that made the same decision or are making that decision this week."

How long does it take to get the ice back in if you get the green light?

"Typically, it would take us a day to get the compressors back on and get the system to start cooling the floor. It will take roughly 24 hours to pull the floor back down to (the right) temperature before we can start making ice and then you're looking at a minimum of 24 to 36 hours before the sheet is able to be skated on."

Are ice makers around the NHL close?

"Without a doubt. The ice makers and the operations departments in the buildings, we all stay in touch with each other, everyone's friends on Instagram and Facebook. Our facility operation managers association normally gets together right at the end of the season in different locations across the country to meet, strategize and brainstorm."

Is there a lot of talk among ice makers about the challenge of hockey in the summer months?

"Yeah, I mean, everybody's kind of in that uncertainty area right now, not sure what's going to happen and what the next steps are going to be, but we're all hoping we get back up and running at some point here sooner rather than later."