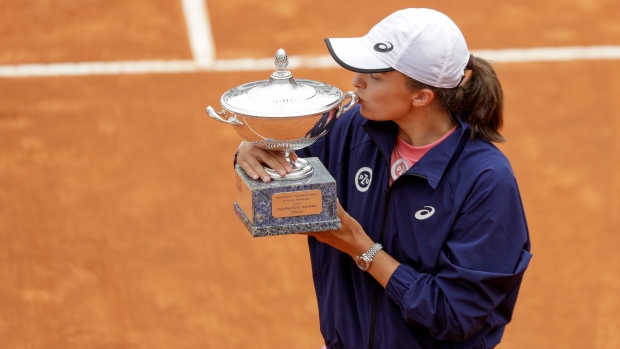 If Iga Swiatek continues playing like this, she might have no problem defending her French Open title when the year’s second Grand Slam starts in two weeks.

The 19-year-old Pole routed Karolina Pliskova 6-0, 6-0 with what is known as a “double bagel” score in an Italian Open final that lasted just 46 minutes Sunday.

Blasting winners at will with both her forehand and backhand, Swiatek won 51 of the 64 points.

She led 17-5 in winners and committed only five unforced errors to Pliskova’s 23.

Swiatek’s third career title will move her into the top 10 of the rankings for the first time on Monday — to No. 9.

Pliskova was playing in her third consecutive final at the Foro Italico, having won the title in 2019. The veteran Czech player slammed her racket to the clay in frustration early in the second set and received a code violation warning for unsportsmanlike conduct.

Later, Rafael Nadal was renewing his rivalry with Novak Djokovic in the men’s final.