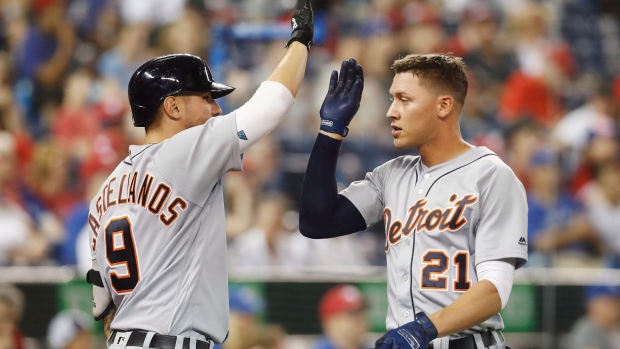 TORONTO — Blue Jays left-hander Ryan Borucki delivered another strong outing in just the second major league start of his career. But for a second straight time, he came up short of a win.

Borucki struck out eight batters and allowed two runs over seven innings of work in his home debut Monday, but the effort was spoiled by a 3-2 loss in 10 innings to the Detroit Tigers.

The 24-year-old Borucki made his MLB debut last week, allowing two runs over six innings in a loss to the defending champion Astros in Houston. Manager John Gibbons said he was impressed with both starts.

"Down in Houston he got into some jams and came through ... today they started rolling out some hits and then he just kicked it in against a team that can hit left-handed pitching," Gibbons said.

"It says a lot, he looked like he was in control, didn't ever panic. Another impressive outing for Borucki."

Jose Iglesias drove in Niko Goodrum for the winning run in the 10th inning. Goodrum hit a one-out triple off Blue Jays reliever Seunghwan Oh (4-3), and Iglesias followed with a sacrifice fly to right field to put the Tigers ahead.

Oh was thrust into relief for the third time in the last four games.

"Those guys are never going to be perfect, you wish they were," Gibbons said. "(Oh's) been pitching really well, they just hit it in the right spot."

Blaine Hardy recorded three outs in the bottom of the 10th for the save. Hardy replaced reliever Buck Farmer after a leadoff single from Lourdes Gurriel Jr.

"It was a great performance," Tigers manager Ron Gardenhire said of his starter.

The Tigers (38-48) salvaged a split of the four-game series after dropping the first two games to the Blue Jays (39-45) on Friday and Saturday. Sunday's win snapped a season-high 11-game slide for Detroit.

"That losing streak was a little bit tough on this clubhouse," Hardy said. "Now that we have two wins in a row, I think we're back to where we need to be."

Borucki's eight strikeouts tied Roy Halladay for the second most by a Blue Jays pitcher in their home debut. Jose Nunez holds the record with 11.

But Borucki said he models his game after another former Toronto starter — Mark Buehrle.

"He works fast, just attacks the zone with all his pitches," said Borucki, a native of Mundelein, Ill., north of Chicago where Buehrle spent most of his career. "I got to watch him a lot growing up as a White Sox fan so I did take a lot of parts of his game and put them into mine."

The Tigers opened the scoring in the first inning, hitting four consecutive one-out singles. The last one, an RBI for Victor Martinez, gave Detroit a 1-0 lead.

Teoscar Hernandez drove in Curtis Granderson with a groundout to tie the game 1-1 in the fifth inning, but Detroit reclaimed the lead in the sixth on a fielder's choice that allowed Nicholas Castellanos to score.

Toronto tied the game again in the ninth on a bases-loaded walk from Justin Smoak.

Notes: The Blue Jays recalled Gurriel Jr. and optioned Darnell Sweeney to triple-A before the game. Gurriel started at second base. ... The roof was closed for the third consecutive game because of a heat warning issued for the city of Toronto. ... Attendance was 29,575. Toronto opens up two-game mini-series with the New York Mets on Tuesday at Rogers Centre.