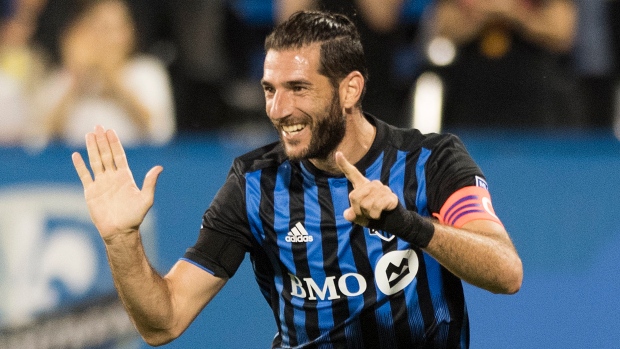 MONTREAL — It's a win that doesn't quite feel like a win for the Montreal Impact.

The Impact are taking a one-goal lead into the second leg of the Canadian Championship semifinal after narrowly defeating 10-man Cavalry FC 2-1 in the first leg on Wednesday.

Montreal was leading 2-0 through an Ignacio Piatti brace before Sergio Camargo scored a crucial away goal for Calgary's Cavalry FC in the second half, breathing new life into the tournament for the Canadian Premier League spring champions.

The second leg will be played Aug. 14 at the 6,000-seat Spruce Meadows in Calgary.

"I don't think it's a great result for us," said Impact midfielder Samuel Piette, who was back in the lineup after missing four games with an intercostal injury. "Obviously you want to win the game and at home, you especially don't want to concede and that's not what we did today. We could have closed the game by scoring a third goal.

Coming off a 6-3 loss versus the lowly Colorado Rapids in MLS, Impact coach Remi Garde was determined to give the 12,665 fans at Saputo Stadium something to cheer about by starting regulars Piatti, Maxi Urruti and Lassi Lappalainen.

Despite playing with 10 days of rest, the lower-ranked Cavalry could hardly compete with that stacked Impact lineup. Goalkeeper Marco Carducci was busy, making seven saves as Montreal outshot Cavalry 9-1.

The Impact fully controlled the game until Cavalry's goal against the run of play.

On a complete defensive breakdown for Garde's men, Camargo found himself all alone in the box and pulled a goal back in the 69th minute. Impact goalkeeper James Pantemis had no chance on the play.

"We were a bit clumsy in the middle of the field losing the ball," said Pantemis, who only faced that one shot. "I saw everything unfolding in front of me. It was a good finish, I'll give him that. Those are things we need to correct."

The visitors were reduced to 10 men two minutes later when captain Nikolas Ledgerwood was shown a second yellow card for a tackle on Piette. The Impact could not take advantage of the extra player in the game's final 20 minutes.

"Even when we went down to 10 men, it shows the spirit of this group and why we're having a good season. We don't give up," said Cavalry coach Tommy Wheeldon. "And all we needed was one or two more chances.

"We know that if we scored one goal, it's a whole different ball game in the second leg."

A bad giveaway by Cavalry led to the game's opening goal in the 32nd minute as Urruti poked the ball away from a nonchalant Julian Buscher right into Piatti's path. The Argentine weaved around defender Mason Trafford and fired an unstoppable shot into the top corner of the net.

Montreal doubled its lead in the 49th minute when a low cross from defender Bacary Sagna evaded three Cavalry players to find Piatti alone at the far post.

Piatti nearly completed his hat trick but he missed a wide-open net in the 52nd minute. Camargo scored for Cavalry 17 minutes later.

"It's too bad that we conceded that goal and that we failed to score a third," said Garde. "Nacho came close tonight. We could have done better in the final third. When they were down a man, they really closed up and fought until the end."

The Impact improved to 8-0-5 all-time at home in the Canadian Championship.

The winner between Montreal and Cavalry meets either the Ottawa Fury or Toronto FC in the final next month.

It was a busy day for the Impact, who made three moves at the MLS summer trade deadline day.