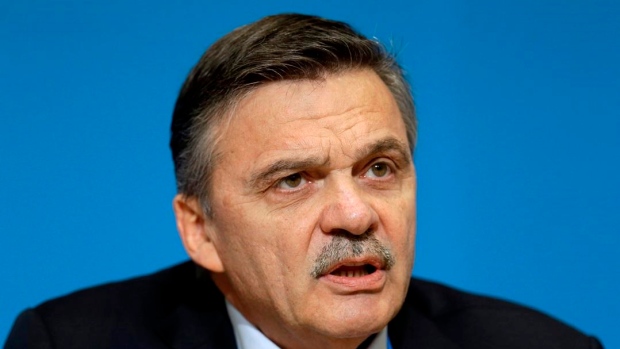 OSTRAVA, Czech Republic — Rene Fasel is holding out hope the NHL goes to the 2022 Olympics.

The president of the International Ice Hockey Federation also isn't willing to wait as long as he did last time around for an answer.

Speaking at the closing press conference for the world junior hockey championship Sunday, Fasel said he needs a thumbs up or thumbs down from NHL commissioner Gary Bettman on the Beijing Games by the end of August.

The league sent its players to every Olympics between 1998 and 2014, but declined to participate at the 2018 Games in Pyeongchang, citing travel, cost and logistical concerns.

Fasel said he wants a decision at least 17 months prior to the opening ceremony to make appropriate plans one way or the other. The NHL announced just 10 months prior the 2018 Games it wouldn't be going to South Korea.

"We would like to have a decision as early as possible if they're coming to Beijing — 'Yes' or 'No,'" said Fasel, who added he spoke with Bettman before the holidays. "In Pyeongchang there was a late 'No.' Especially the North American teams, U.S. and Canada, had some problems to find the players and to build up a good team.

"If there is a 'No' these teams should have time to prepare a competitive team to go to the Olympics in 2022. We want to have an early answer from NHLPA and NHL if they're coming or not."

The IIHF will hold its final qualifying tournament in late August and early September, and wants answer before those countries hit the ice.

"We are working on an early decision made by the NHL and NHLPA," Fasel said. "We need to know before that."

NHL players have made it clear they want to return to the Olympics for a best-on-best event, but the league has been lukewarm, at best, on the idea.

Bettman said putting the schedule on hold for two weeks is "disruptive" at the board of governors meeting in December.

The NHL would prefer to hold its own tournament for a number of reasons — it last held a World Cup of Hockey in September 2016 — but Beijing is the next opportunity for a best-on-best tournament after plans for a 2021 league-run event were recently scrapped due to time constraints.

Fasel said Olympic exposure in 2022 would grow the sport exponentially in China's mostly-untapped market of more than 1.3 billion people.

"The first mission is to promote the game of ice hockey," he said. "The Olympic Games is the unique platform we can use, especially in Asia, with the best on best. Asia is two-thirds of the population in the world. I consider Gary a smart person.

As for the 2020 world juniors, organizers said roughly 175,000 spectators will have gone through the turnstiles in Ostrava and Trinec. The attendance record for a European-based tournament was just over 215,000 fans in 2016 in Finland, but the Czechs used smaller facilities that were filled to an average of around 81 per cent capacity for the 31 games.

Next year's event is set for Edmonton and Red Deer, Alta., while the 2022 edition will be played in Gothenburg, Sweden.

"It's amazing," Gonzalez said. "They continue to follow their junior players wherever they are. It's part of a tradition now at Christmas."

Fasel, meanwhile, has his fingers crossed the NHL returns to its tradition of going to the Olympics.

"I'm always optimistic," he said. "If the (NHL) doesn't go, we will do like we did in Pyeongchang. It's not the same, I must agree, but we also had a good tournament in Pyeongchang with an interesting final with Russia and Germany.

"Especially for the hockey fans, and for our game, it would be so good to have the best on best."

This report by The Canadian Press was first published Jan. 5, 2020.