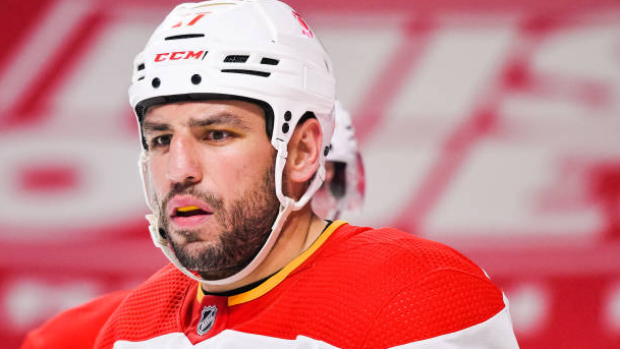 For someone who loves hockey as much as Milan Lucic does, there was a time in the not-so-distant past when hockey didn’t love him back.

Burdened by a big contract (seven years, $42 million) he signed with the Edmonton Oilers in 2016 and the unfulfilled expectations that soon came with it, hockey was no longer a source of joy for Lucic.

He was in the midst of his first season with the Calgary Flames after a summer trade with the Oilers for James Neal and struggled to find a role with his new team.

"I think after about six, seven weeks into the season I remember playing, the first time we played St. Louis here on a Hockey Night in Canada game, I got benched in the third period and nothing was said to me by anyone and I wasn’t really happy about it,” he said a couple of months later.

“I even started questioning whether I should hang them up because it just wasn’t fun for me anymore.”

Much has changed since then.

Lucic has become a valuable dressing room leader for the Flames. He’s stabilized the team’s third line, provided a physical presence and ranked sixth this season in even-strength points (19).

He played his 1,000th career NHL game in April.

On Monday, Lucic was voted the Professional Hockey Writers Association’s Flames nominee for the Bill Masterton Memorial Trophy, awarded annually to the player who best exemplifies the qualities of perseverance, sportsmanship and dedication to hockey. The three finalists from among 31 nominees will be named at a later date.

In a league often chastised for its lack of complex characters, Lucic is the opposite.

He rose from the Boston Bruins’ 2006 second-round draft pick to cult hero on a Stanley Cup champion just five years later. There was the mental anguish his big payday ultimately caused him. Lucic talked openly about his father’s suicide. And then, at just age 31 at the time, thinking of walking away from the sport.

Now he finds himself in the midst of a career renaissance of sorts.

“I think what persevered is my love for the game,” Lucic said after finding out about his Masterton nomination. “Even though those thoughts were in my mind, I never really didn’t enjoy coming to the rink. I still loved practising and working hard and playing the game, and I think the love of the game was kind of what got me through it and kept me going.”

Despite being a Flame for just a couple of seasons, Lucic’s leadership has had a profound effect on teammates.

“Ever since he’s come here, he’s been a leader in our room,” captain Mark Giordano said. “I think guys look up to him … he’s a guy who’s easy to get along with on the ice and off the ice. I think guys gravitate towards him. He’s been around a long time. He’s a good teammate. He sticks up for teammates.”

One of the teammates Lucic has helped is Dillon Dubé, the 22-year-old winger who will represent Canada at the World Hockey Championship May 21-June 6 in Riga, Latvia. The two have been linemates at various points over the past two seasons, Lucic the eager mentor and Dubé the enthusiastic protégé.

“It’s a great relationship,” Dubé said. “To be honest, he’s helped me out a lot and seeing how he’s been able to stay in the NHL so long with how hard he works. I remember my first couple of practices, we were missing a guy and I thought I was going to have to do double reps, and he kind of pushed me aside and said, ‘I’m going. I’m getting these reps in.’ You don’t see that too often with guys who have played as long as he has.”

Lucic’s impact this season goes well beyond the confines of the Calgary dressing room.

As part of his 1,000th NHL game celebration, the Flames approached Lucic, offering to make a significant contribution to any charity he selected. He chose Wood’s Homes, a non-profit children’s mental health centre in Calgary.

As the COVID-19 pandemic continues to take a toll on the mental health of people of all ages and backgrounds, Wood’s Homes was ecstatic that Lucic wanted the donation to go towards helping children and families navigate those challenges.

“The more that you can have someone with a name like his supporting this and drawing attention to this, really goes a long ways in helping us help children, youth, and families,” said Jonathan Hutton, a clinician who works closely with Wood’s Homes clients.

“When [the Flames] make a donation like this, it goes a long way to helping families with immediate counselling services, no cost to them,” said Hutton. “And then, of course, it helps us augment those services as well, such as the ability to have phone counselling services, text, live chat, or through e-therapy as well, which is email-type therapy.”

While Lucic has regained his love for the game, he has still thought about what his place in the game will be once his playing days end. He could see his next role focused on player assistance, similar to what former Flame Brian McGrattan now does for the organization.

“Maybe being an outlet for guys who are having trouble off the ice,” Lucic said.

As a disappointing season in Calgary reaches its conclusion, the winds of change are coming for the Flames. Having already agreed to waive his no-movement clause for the upcoming expansion draft, Lucic may not be back with the organization for the upcoming season. The Flames hosted the Vancouver Canucks Thursday night and will play them three more times to close out the 2021 season.

The Montreal Canadiens clinched the fourth and final playoff spot in the North Division Monday night, eliminating both the Flames and Canucks from postseason contention.

Despite his unknown status with the team next season, Lucic’s impact on the Flames and the greater community will be felt for years to come.